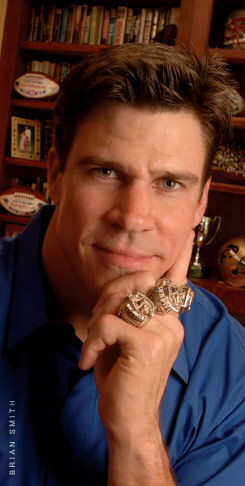 Football—a game of numbers. How many yards. How many touchdowns and field goals. How many chances to make a first down.

After 10 years with the New England Patriots, the only NFL team he’s ever known, 32-year-old Ted Johnson has hung up his No. 52 jersey in retirement.

But he’s still in the numbers game. Johnson left with 866 tackles under his belt. He’s seen only one owner, three head coaches and has earned three Super Bowl rings. It took him 10 seconds to let me know how important New England sports fans are to him, and when he’s not chasing his four children around, he’s planning on chasing his next career adventure at 100 m.p.h.

Taming his self-proclaimed “gypsy spirit,” this 6’4″ retired linebacker has found a home for his family in Weston. And seated in a comfy leather armchair, he takes some time out to talk to WellesleyWeston Magazine before picking up the kids from school.

WellesleyWeston (WW): Was football always part of your life?
Ted Johnson (TJ): It started early. My dad was a football fan. He used to take me to Oilers games in the old Astrodome. I was always an aggressive kid. I loved the contact. One of my favorite lines: I asked a coach in college what’s the key to recruiting, how can you tell if someone is going to be good? He answered, “if they don’t bite when they are puppies, they won’t bite when they’re big dogs.”

WW: After a childhood in Houston, then moving to Iowa, where you followed the Hawkeyes, you settled in a place where football wasn’t No. 1—San Diego.
TJ: I didn’t know what to expect. I just thought everyone surfed. I showed up in a jean jacket and jeans and stuck out like a sore thumb the first day of school. I became a surfer because I wanted to fit in. But it wasn’t for me. I was a jock at heart, so I started playing football. I missed a summer in sophomore year [of high school] and when I got back the coach said, we have enough tight ends, why don’t you play linebacker. So I played linebacker and I drilled this kid really hard. I’ve been playing linebacker ever since.

WW: Your entire NFL career has been with the Pats. That’s unusual.
TJ: There’s a ton of turnover [in football]. When I was drafted in ‘95, there were 30 teams. It was blind luck that I landed in what’s probably the perfect sports town. I love the fans, their passion. That’s what drove me. I have seen my boss Mr. [Robert] Kraft adapt to the business, learn things and do things differently than he maybe did earlier.

WW: New England sports fans are really like no other fans in the US.
TJ: I’ve never lived in a place like this. The fans truly embraced me. They were so gracious. I’ve never had a bad encounter in 10 years. I’m amazed by that. I always appreciated their enthusiasm, their kind words and support. There was always good synergy between me and the community.

WW: You had a few injuries along the way that impeded your play. Can you tell me about the struggle you had with those and finding a role with the Pats?
TJ: I think part of it was that I came in with a bang. I started as a rookie under Coach [Bill] Parcells, and I had early success in my career. I went to the Super Bowl my second year. I was basically handed the keys to the car and told don’t screw it up. I was playing football at a high level.

Then I tore a bicep at the end of week 12 of the ‘98 season, tore the other one the first week of ‘99. So I missed 10 games. That’s when things started to slow down. In this business, your body is your commodity. If you can’t play, your value goes down. I’ve always been a team guy, a team leader. I found what I had to do was adjust the way I thought. Instead of sucking my thumb and feeling sorry for myself, my job was to get healthy. I took it very seriously and I worked my ass off. My role got a little more and more refined. With Coach [Bill] Belichick, he saw me as more of a role player and I had never been that. That was tough. We had our problems, but we were able to work it out.

WW: You were with the Patriots as they went from being a so-so team in a shoddy stadium to a blueprint for how a team should be in a state-of-the-art facility.
TJ: I loved that old place. Some of my best memories are from Foxborough stadium. You talk about Drew [Bledsoe], Troy [Brown], Willie [McGinest], and me and Tedy [Bruschi], and back then Ty [Law] and Lawyer [Milloy]. We helped put the Patriots back on the map. Then Bill came in and took it to another level. I will always be proud of those teams in ‘96, ‘97, ‘98, even ‘99. And Mr. Kraft is one of the most competitive people you will ever meet. He’s got such an innate sense of how to get the best out of people. I was proud to play for him.

WW: On July 28, 2005, you let the world know your decision to retire from the Patriots. How did that decision come about?
TJ: I didn’t feel like myself. I couldn’t put my finger on it. My wife, my team and I decided that I was going to play this year out and finish the contract. That was my intention, to play football this year. I made every workout, every camp. I didn’t miss one thing.

A few days before camp, I got a sick feeling in my stomach that said, you’re taking a big chance going out there. Your body will tell you. I met with my own personal physician, and he had serious concerns about my head trauma. During a game there were little concussions where I would get up with blurred vision. I would stumble back to the huddle, trying to see the signal. I got those all the time. I just thought it was part of the game, but that’s not normal. They were happening with more frequency, and it didn’t happen early in my career.

WW: So you’re at peace with your decision?
TJ: It was very hard and it was very easy at the same time. I consider myself a very conservative guy, but if I look at the risk I took here and the chance I took there, they got me to where I’m at today. You have to really be true to yourself. I had to come to grips with it. I wanted the blessings of two people and two people only—my wife and Mr. Kraft. I got it from both. That was all I needed.

WW: What are you going to miss the most?
TJ: I’m going to miss the banter. The camaraderie. There’s a lot of rejection, a lot of getting your butt kicked, soreness, fatigue and overcoming so much adversity. But you’re doing it together, and that’s what makes it so special. I’m also going to miss that feeling of a big hit. The stadium being alive and electric, knowing that everybody saw that and experienced that with me. I played the game for pure reasons. Also seeing my teammate do something great when I know how hard he’s been working. There’s not another feeling like it.

WW: What are you glad to leave behind?
TJ: I won’t miss rehabbing. Doctors checking me out all the time, poking and probing. I would also like to broaden my emotional and spiritual horizons. Football doesn’t lend itself to that. Football is football football football.

WW: How did you settle on your recent move to Weston? 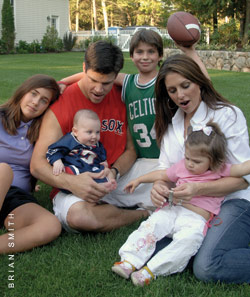 TJ: I told my wife, if I’m going to live in New England, I’m going to live in the town I want to live in. There were two towns I liked…Wellesley and Weston. My wife is from Wayland, so I got to see Weston a little bit more. I wouldn’t live anywhere else. This is the quintessential neighborhood. It’s just gorgeous.

WW: Your household is pretty full, with four children keeping you busy.
TJ: Stephanie is 11. My son Jake is 7. Samantha is 15 months and Charles is 4 months. He’s off the charts. He’s over 100 percentile in height and weight.

WW: A future sports star?
TJ: Whatever they want to do. Whatever passion they have, I’ll support them. Find something you love and go do it 100 miles an hour.

WW: What does your own future hold?
TJ: I don’t know yet. I love golf, but it’s a trap that you can get into. You start playing golf and before you know it, you’re playing golf for five years and you don’t have a job. You have to be very careful after a professional career is over. The divorce rates jump. Guys deal with self-esteem issues. So much of their esteem is derived from their performance and that’s not there anymore. I take that very seriously.

I’m very proactive. What I love about Boston is it’s a big city with a small town feel. People who work hard, have integrity and are successful in their industry all know each other. I’m lucky that I have the opportunity to learn from them, talk to them and have access to them. I don’t have the answers right now about what I want to do, but I can’t wait. Whatever it is, I’m excited about it.

WW: Retiring from your role as LB, what’s your new role?
TJ: I tell my wife, I’ve taken on fullbacks and guards and they were easier than this! I’m changing diapers. I’m doing dishes. I’m trying to keep the baby from crying. I’ve got one kid hanging from the chandelier. I’m thinking, this is pathetic. I used to be a football player a month ago and look at me now. (laughs) It’s a challenge.

WW: You’re giving Mr. Mom a run for his money—a complete change from your strict football schedule.
TJ: When football season started, everything stopped. It was all about me, and everyone fell in line. It was a very disciplined life, and my family followed suit. To get the most out of my ability, that was what I had to do. Football is regimented, the same thing, the same time. Now with that gone, it’s utter chaos around here (laughs).

WW: Will you stay in New England?
TJ: I’ve lived here longer than anywhere else. My roots are really here. I’ve never had roots. I have a gypsy spirit, but at the same time I want to hang back and be content in one place. I’m looking forward to another career and hopefully I will have as much success with that as I had with football.

WW: Sounds like you have a great support system, no matter what you choose.
TJ: My wife and I…I’ve always said we’re two storms that come together to make the perfect storm. It’s been a blast. I love the town I’m in. I love my kids. They’re beautiful. Would you like
to meet them?

WW: I would love to.