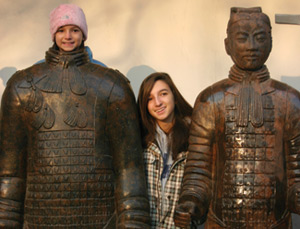 above: Molly (right) and Ali Hickey with Terra Cotta Soldiers at an archeological dig in X’ian China. below: The Nocka family in Morocco.

The wellesley-based Komjathy family had been living in Geneva, Switzerland for only two weeks when mom Betsy realized at noon one day that her younger son’s soccer club was holding its first practice in the next half hour. Instant chaos ensued. Clothes flew out of suitcases and boxes in a wild search for cleats and shorts. A frantic, futile scramble for shin guards was the last straw. “They were in our ocean container that hadn’t arrived. That should have been the deal breaker,” said Komjathy. “I was sending my son off in a foreign country with kids he doesn’t know and with whom he can’t communicate without the right equipment.” But in a flash, son Chris cut up a moving box, fashioned new shin guards, stuffed them into his socks and flew out the door. “I was in shock,” says Komjathy. 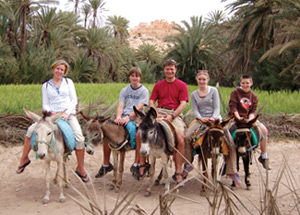 That the Komjathys’ son was so unruffled (not to mention resourceful) was just one of the revelations that caught the family by surprise when discussing their recent move to Europe. Indeed many Wellesley and Weston families interviewed for this article have expressed downright astonishment at their family’s adaptability during the years that they were abroad. Some were no less amazed at their reaction when confronted with the life-altering news that they needed to pick up stakes and head overseas. “When we found out we were moving to China, it completely threw me for a loop,” says Weston resident Louise Chauncey, “but once my daughters found out we were going, they were excited. They would have been disappointed if we didn’t go.”

Professional advancement remains the principal catalyst for these significant moves. “It was a great career move for him,” says Sarah Nocka of husband Steve, whose Bank of America job took the family to London for the past four years. A fragile economy combined with scarce job opportunities can make an international move not only enticing but sometimes downright necessary. “Our move was partly because of the economy,” says Louise Chauncey, whose husband Patrick Hickey, went to Shanghai to work for Staples, “and partly it was a new opportunity and it was exciting to have the opportunity to work overseas.” The Hickey family soon followed. “It was a hard year but it was the best experience I could have given my girls,” says Chauncey.

As an idle daydream, the idea of chucking the MetroWest scramble to move to a European capital can sound as enticing as a cold gelato eaten under a warm Italian sun. But for the families who get their marching orders, that hazy reverie comes up hard against the practical realities of moving a bunch of differently-aged people thousands of miles away — not for a two-week vacation, but for a number of years. For most, it is no simple decision. “We were both very involved with our community, our kids were settled,” says Nocka. “Why would we give up a good thing?” The Heydari family knew that they needed to present a united front. “We didn’t give them a choice,” says Wellesley resident Victoria Heydari with a laugh, whose family lived in Dublin for a year. “We weren’t all touchy-feely, saying what do you think? No one wants to change so we just told them we were moving overseas.” Sarah Nocka maintains making the decision was the hardest part. “I was agonizing over it and second-guessing myself,” she says, “but once you’ve made the decision, it takes on a life of its own and it is exciting.”

But to a teenager, hearing that your parents have decided to yank you out of your school, away from your friends, and out of your hometown is a message that simply can’t compute. “My oldest son left behind his brand-new job, his driver’s license which wasn’t honored in Ireland, and his friends,” says Heydari. “He gave up a lot.” Robert and Nicola Swift left Weston three years ago for Sydney, Australia. In spite of an extremely successful transition, Nicola observes, “What they say about the younger-you-can-move-the-children-the- better is true. With hindsight, it was much harder, for much longer than expected, to move a teenager or a young teenager.” In fact, Nicola realizes that her daughter Martha may be well equipped to win family arguments far into the future. “It is the stick that Martha will beat us with forever!” she says.

Yet, every single family interviewed for this article cheerfully reported that their children slipped into life in their new countries with remarkable equanimity and grace. “The boys did so well,” says Heydari of her three school-aged boys. “Everyone was so welcoming.”

School choice seems to make the difference. Most families chose to send their children to an international school where ex-pat families can find a common language and experience. Because international workers are a transient bunch, these schools tend to be fluid environments with students fluctuating with the seasons. “I think that because in an ex-pat school kids are always coming and going, there are fewer cliques,” says Sarah Nocka, “or the cliques are less fixed. There is always a lookout for the new kids.” Having said this, then eighth grader Cameron Heydari said the adjustment to his new school system was the hardest part of his year in Dublin. But meeting people from around the world was an unexpected bonus too. “My daughter made friends from as far away as Indonesia, Italy, Denmark, and Sweden,” says Louise Chauncey. “Oh, and Ohio!” And because European schools can easily arrange to zip students across borders, field trips don’t visit the local zoo, they take off to Germany. “Our son went to Cairo for a baseball tournament,” laughs Nocka. “None of this going to Attleboro!” Betsy Komjathy was amazed that for the first week of school, her son’s 8th grade field week (not field trip) meant going to France for five days. “Please find your child’s passport,” she remembers hearing on the first day of school.

Not that the kids get to have all of the fun. The opportunity for travel helps deepen an already rich adventure for families no matter where they land. “We made sure that the girls saw China and beyond,” says Louise Chauncey. “We went to Beijing, the Great Wall, Hong Kong, we saw the Terra Cotta warriors, things that we would have never seen otherwise.” The Nocka family has kept busy too. “Instead of skiing in Vermont, we can get to Zermatt or Austria or Italy,” says Sarah. “We counted; we think our daughter Kristen has been to 14 countries. It’s been a real eye opener. ” 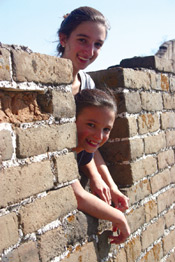 But ski trips to Austria aside, life abroad can challenge even the most hardened thrill seeker. “Let’s see, our first 35 days in Dublin, it rained every day,” said Victoria Heydari, “our container didn’t arrive for a month so we couldn’t move into our house. And when we got to our house, literally nothing worked. Only scalding water came out of the taps.” Sarah Nocka remembers blowing out tires because she, like most US drivers, overcompensated when driving on the left. “I knew someone who blew out so many tires that when she would enter the tire store, the staff would clap and cheer,” she says. Language issues can build barriers for eager newcomers as well. “Being surrounded by French speakers can be frustrating and isolating,” said Betsy Komjathy, “just not knowing what people are saying.” Lucky for the Hickeys in China, their younger daughter displayed a knack for Mandarin and became the family translator. “We would troop in to a store and the Chinese thought it was so funny to have this young girl being in charge of all the communication,” says Louise.

The inevitable headaches of living abroad were another unanimous observation. “People don’t know how easy and convenient and what a nice standard of living we have in the US,” says Sarah Nocka, “everything is just easier.” And that lesson in patience and tolerance has had a big impact on families who have returned and for those still living abroad. “We came back with an unbelievable appreciation for the little things,” says Louise Chauncey. “We never got to see blue sky or drink straight out of the tap. We realized how spoiled we are.” But being “the foreigner” offers a real life lesson in tolerance for families used to knowing the ropes. “Being the ones who dress strangely and talk strangely will make my boys much more sensitive when they return to other kids who might not fit the norm,” said Betsy Komjathy. And feeling a bit alienated ironically offers something many Wellesley and Weston families feel they never get enough of: real family time. “My boys hang out together, they play together, they sleep in the same room,” says Betsy Komjathy. “That would have never happened at home. They would have been off with their buddies.” 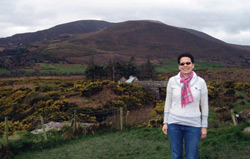 Victoria Heydari at the Ring of Kerry in Ireland

Yet despite some of the nuisances, the language issues, the driving challenges (“driving in Shanghai is whacko” says Louise Chauncey), and the occasional loneliness and isolation, for most families, the experiences abroad are transformative. “There has been a chance every year that we would come home,” said Sarah Nocka, “and both of my older children indicated that they would choose English boarding school instead.” Both Louise Chauncey and Victoria Heydari’s husbands are still working overseas and both had children who explored the idea of staying behind with their Dads so as not to have to leave the countries they had come to love.

This ingrained affinity for their new surroundings is a powerful reminder of the hold a “place” can have on one’s psyche. Betsy Komjathy takes her dog to walk along the shores of Lake Geneva every morning. “I look at the lake with clouds and the colors and the Alps in the background,” she says. “I don’t think it will ever get old. And we are all deeply excited for what’s to come.”

Former Wellesley High School Principal Rena Mirkin has been living in China with her husband Howard for the past three years, where she is principal of the high school at the Western Academy of Beijing. Here are some of her reflections about living abroad.

Howard and I love living in Beijing. Western Academy of Beijing (WAB) is a wonderful school and we are most involved in school life. (Some things do not change!) We are having a marvelous adventure – traveling, meeting interesting people (Jane Goodall will visit WAB this week for a second time) and have traveled to places that were once as exotic as the moon!

I think that one of the most interesting things about living abroad is the “tightness” of community connections.

Being part of a school community here in China, the people with whom you work become not only your colleagues, but also your friends and to some extent, your family. It is with these people we spend most holidays and celebrate the yearly milestones of life.

What we miss, of course, are family and friends. It is difficult to miss sharing both joyous occasions and challenging times with those we love. Skype could be considered the greatest invention in history – it allows us to be in constant touch with incredible ease.

We really do not miss most of the things one would expect – food, TV, owning a car. We have a beautiful townhouse here, access to a driver, interesting food, etc. We embraced our lives here with few compromises. In addition to people, what we miss are the ocean and lovely fresh fish! Of course, the Red Sox!

Several of my dear Wellesley students (and some parents) have been in Beijing and we love having them visit. It is marvelous.
Warm regards to all.