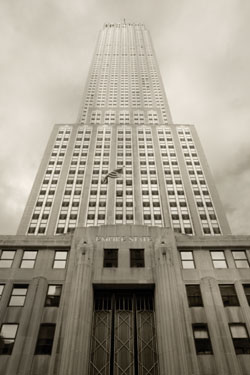 In a scene from Woody Allen’s film Manhattan,a sweet ode to New York City, Allen and co-star Diane Keaton sit below the Queensboro Bridge in the early morning hours to watch the sun rise. Between the neuroses and Gershwin’s “Someone to Watch over Me,” Allen, seemingly overcome by the moment, can only sigh, “Boy, this is really a great city.”

He’s right, of course. Even the most jaded Bostonian can—or should—be able to admit that. But New York, perhaps more than any other American city, has always been a matter of perspective, since its capacity to be defined and redefined is nearly limitless. To put it differently, the Big Apple can be sliced up and seen more ways than pastrami at Katz’s Delicatessen.

Most visitors often sightsee by neighborhood or hit the tourist spots first, then fan out to well-known shopping destinations. But a novel choice is to explore the city’s wonderful, and complex, relationship between the past and present. Both the timeless and the avant-garde can be found on nearly every street corner. And anyone can, in the same trip, still step into surroundings tailor-made for Mad Men’s Don Draper, while also savoring the current scene.

Below are two snapshots of Manhattan—short guides to the best the city has to offer, no matter what your mood.

Recapture a bygone era that never really vanished. This is the New York of dark oak paneling, dry martinis, and more than a little nostalgia, where you can close your eyes and hear the rhythm of the city, which seems to echo memories of every past era.

St. Regis New York
Two East 55th Street; 212.753.4500; www.stregisnewyork.com; guestrooms from $995
The Beaux Arts-style hotel first opened in 1904 and maintains all its beauty and grace. It’s within easy walking distance of Central Park, but you may not want to leave since all rooms come with 24-hour butler service. The St. Regis also offers suites designed in partnership with Christian Dior and Bottega Veneta, among others. 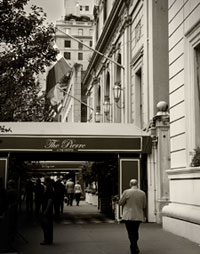 Waldorf=Astoria New York
301 Park Avenue; 212.355.3000;www.waldorfnewyork.com; guestrooms from $319
The Waldorf=Astoria boasts that their hotel is a “living Art Deco museum,” and they might be right. But beyond the impeccable accommodations and service, the hotel’s Guerlain Spa truly sets it apart. Known for its skin care treatments, the spa provides plenty of other pampering therapies amid meditative luxury.

The Pierre
Two East 61st Street; 212.838.8000; www.tajhotels.com/pierre; guestrooms from $595
The venerable hotel re-opened last year after undergoing a $100-million renovation on all of its 189 guestrooms and suites. The Pierre’s original 1930s charm has been recaptured—and enhanced with modern touches such as Bose sound systems and floor-to-ceiling glass-walled showers.

Grand Central Oyster Bar
89 East 42nd Street; 212.490.6650; www.oysterbarny.com; entrees, $20.95–$34.95
The literary James Bond believed the oyster stew to be the best meal in New York, and all seafood is fresh off the boat. Beloved by locals and weary travelers alike, the Oyster Bar, which opened in 1913, isn’t short on period atmosphere with a vaulted tile ceiling accented with gleaming white lights. 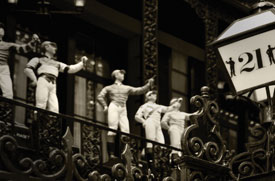 “21” Club
21 West 52nd Street; 212.582.7200; www.21club.com; entrees, $30–$49
It’s difficult to miss the colorful lawn jockeys that adorn the outside of this swank Midtown establishment, and inside diners can choose from three restaurants: a celebrated bar room, an upstairs dining room perennially listed as one of the most romantic spots in the city, and a cocktail lounge perfect for pre- or post-theater libations. All serve classic American fare, paired with an award-winning wine list.

Delmonico’s
56 Beaver Street; 212.509.1144;www.delmonicosny.com; entrees, $28–$90
Synonymous with sumptuous dining, Delmonico’s opened in 1837 and is famous for its namesake steak and potatoes dishes, but can also very proudly lay claim to serving the first Lobster Newburg and Baked Alaska. Its Financial District location still evokes a turn-of-the-century chic that shouldn’t be missed. 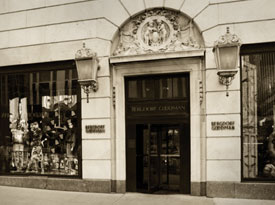 Bergdorf Goodman
754 Fifth Avenue; 800.558.1855;www.bergdorfgoodman.com
When Carrie Bradshaw began to worship at the altar of Bergdorf Goodman in Sex and the City, the department store had been an icon for a century. For instance, in 1914 it was the first clothier to introduce ready-to-wear fashion. Today, the posh emporium spans eight floors and numerous clothing and apparel sections and, unlike similar stores, can be found only in New York.

Strand Bookstore
828 Broadway; 212.473.1452;www.strandbooks.com
Founded in 1927, the Strand proclaims that it has “18 miles of books,” and that seems a modest appraisal. The last vestige of old Book Row sells both new and used volumes and is known for its rare books collection, making it the perfect place to secure a special edition of Twain or Woolf.

Billy Reid
54 Bond Street; 212.598.9355; www.billyreid.com
Billy Reid is not an old label; in fact Reid was named the 2010 best new menswear designer in America by GQ. However, his men’s and women’s lines represent a timeless aesthetic, and his Manhattan store (the only one in the Northeast) has a luxuriously vintage feel.

Ice Skating at Wollman Rink
Central Park, East Side between 62nd and 63rd Streets; 212.439.6900; www.wollmanskatingrink.com; weekend admission and skate rental, $21
Rather than grapple with tourists at Rockefeller Center, head to ice skate at Central Park’s Wollman Rink from November to March. Open since 1950, the 33,000-square-foot surface offers incredible views of the Manhattan skyline and provided an enchanting backdrop for the films Love Story and Serendipity.

Tenement Museum
108 Orchard Street; 212.982.8420; www.tenement.org; admission, $20
A virtual time capsule, the museum tells the story of life on the Lower East Side through six meticulously restored apartments in a tenement building that once housed 7,000 working class immigrants. In each apartment, seen by guided tour, visitors discover the struggles faced by the diverse families who lived there from the mid-1880s to the early 1900s.

Empire State Building
350 Fifth Avenue; 212.736.3100; www.esbnyc.com; admission, $18.45
Some destinations are classics for a reason, and visiting the observation decks on either the 86th or 102nd floor provide a quintessential Manhattan experience, especially if you have children. Avoid some of the lines by purchasing tickets online, or avoid them all with an express pass for $41.52. 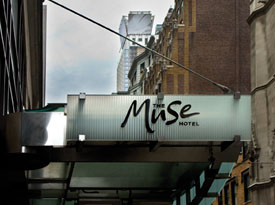 Relish all today has to offer. This is the New York of eclectic sophistication, where diverse influences are packaged into something altogether new, and the instant you close your eyes you’ve missed something special.

The Muse Hotel
130 West 46th Street; 877.692.6873; www.themusehotel.com; guestrooms from $499
A four-diamond award winner, Muse is a contemporary boutique hotel near Times Square and Broadway. Rooms radiate a sleek elegance while remaining warm and inviting, and the hotel offers pet-friendly packages that enable guests to shop with their dogs at Tiffany & Co. and Bergdorf Goodman.

Hotel Gansevoort
18 Ninth Avenue; 212.206.6700; www.hotelgansevoort.com; guestrooms from $325
Conceived as an “urban luxury resort,” the 210-room hotel affords views of the Hudson River, and its minimalist design fits seamlessly into the trendy Meatpacking District. Of note is the hotel’s full-service spa, fashionable nightclub, and heated rooftop pool, which is open year-round.

The Library Hotel
299 Madison Avenue; 212.983.4500; www.libraryhotel.com; guestrooms from $319
Located a dictionary’s throw from the New York Public Library in Midtown, this small upscale hotel is big on concept. The floors are organized by the Dewey Decimal System, and each of its 60 rooms is discerningly appointed with books and art related to a particular subject, such as astronomy or poetry.

Resto
111 East 29th Street; 212.685.5585; www.restonyc.com; entrees, $15–$120
A chic Belgian gastro-pub in Gramercy Park, Resto is serious about meat with oversized charcuterie plates and large-format feasts that offer a unique “nose to tail dining experience.” The menu focuses on local and seasonal dishes, including seafood, and all can be washed down with one of the many Belgian ales on tap.

Bar Americain
152 West 52nd Street; 212.265.9700; www.baramericain.com; entrees $24–$39
It seems like every celebrity chef today is looking for a New York location, but city-bred Bobby Flay has been there all along. His first creation, Mesa Grill is still going strong, while his latest venture combines the spirit of a European brasserie with classic American dishes enhanced by his signature Southwest flavors.

Alexis Bittar
465 Broome Street; 212.625.8340;www.alexisbittar.com
The Brooklyn-born Bittar once sold his jewelry on the street near where his swank SOHO boutique stands today. His modern, and often oversized, designs have elevated him to royal status and feature everything from Lucite to semiprecious stones. Other outposts can be found on Madison Avenue and in the West Village.

Dylan’s Candy Bar
1011 Third Avenue; 646.735.0078;www.dylanscandybar.com
Leave it to the daughter of designer Ralph Lauren to make candy stylish. Like an upscale Willy Wonka factory, Dylan’s features more than 5,000 types of candy along with sweets-inspired beauty products and apparel. Try the store’s café for indulgent desserts, such as S’mores for four.

Kirna Zabête
96 Greene Street; 212.941.9656;www.kirnazabete.com
Supermodels, stylists, actresses, and everyday fashionistas flock to this super-chic Soho boutique for the very latest trends in clothing, jewelry, and accessories. The spacious loft setting with futuristic furnishings is filled with a colorful collection of cutting-edge designs by Stella McCartney, Thakoon, Alexander Wang, and Proenza Schouler, to name a few.

Walking the High Line
West Side, Gansevoort Street to 20th Street; 212.500.6035; www.thehighline.org; free
While strolling the High Line in summer or fall is ideal, viewing the city’s aerial greenway in any season provides a different perspective on the city. Built on a 1930s elevated rail structure, New York’s newest park features public art and numerous places to relax above the hustle and bustle of the West Side.

Neue Galerie
1048 Fifth Avenue; 212.628.6200; www.neuegalerie.org; admission $15
Located in a former Vanderbilt mansion, Neue Galerie opened in 2001 and specializes in early 20th century Austrian and German art. The museum is often overlooked by both locals and tourists, but features masterworks by Klimt and Kokoschka alongside some of the era’s best decorative arts.

Jazz Standard
116 East 27th Street; 212.576.2232; www.jazzstandard.net; ticket prices vary
Jazz Standard presents live music seven nights a week with two sets every night and a third on weekends. From classic jazz to funk, R&B, blues, and more, the club draws today’s top acts and rising stars, and its relaxed vibe is welcoming to aficionados and neophytes alike. Blue Smoke barbeque is served for those who wish to eat in syncopation.

If you go, the following online and print resources can provide some additional inspiration:

www.newyorkmag.com: The website for New York magazine showcases all the latest happenings in dining, art, and culture.

www.iloveny.com: The official New York state tourism site has plenty of travel ideas for trips to Manhattan and for destinations further afield.

Frommer’s New York City 2011 by Brian Silverman, Kelsy Chauvin, and Richard Goodman (Wiley Publishing, Inc., 2010). The classic travel reference has been updated for the coming year and is one of the most comprehensive guides to New York.

Taschen’s New York by Angelika Taschen and Daisann McLane (Taschen America, LLC, 2009). More of a coffee-table book than a pocket guide, the publication is excellent nonetheless— providing a sophisticated look at the city’s most unique places to stay, eat, and shop.