Welcome to the New Temple Beth Elohim of Wellesley 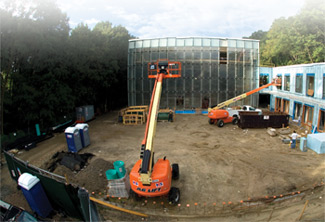 Ground was broken on October 2, 2009 and construction of the new Temple Beth Elohim proceeds through the seasons on what was formerly the temple’s parking lot located in a glacial bowl encircled by trees.

In the beginning, there was a small group of nomads looking to put down roots in the wilderness of the Western suburbs. As this band of Jews made its Exodus across the “Red Sea,” known as the Charles River, they soon realized the need for a Holy Place –where this new Jewish community could come together, grow, teach its children, pray, and study Torah.

Temple Beth Elohim can credit its beginning to 22 women “nomads” who, like many Jews in Boston after World War II, moved to the suburbs to raise their families. In the fall of 1949, these women formed the Jewish Women’s Community Group of Wellesley, primarily for social and cultural connections. In 1950, men became active members as well, and the group changed its name to the Jewish Community Group (JCG). Membership grew — thanks in part to the Welcome Wagon lady who directed new Jewish residents their way — and the JCG broadened its focus to include educational and religious initiatives as well.

As the group outgrew private homes for their JCG activities, they turned to the Wellesley community for space. The Fells Community Church, the former Unitarian Universalist Church on Weston Road, the Friendly Aid Society, and Red Cross all provided space and hospitality until the group had a building of its own. In fact, the churches frequently adjusted their school schedules to fit the needs of their Jewish neighbors.

After a successful fundraising drive, the JCG purchased a plot of land at the corner of Oak and Worcester Streets on which to build a temple, but sold it after the land proved unsuitable. In 1957, the group purchased eight acres off of Cedar Street, where the temple now stands. The next year, the members voted to be part of the Reform movement and named their soon to be built temple, “Beth Elohim,” which means “House of God.”

Construction of Temple Beth Elohim, the first temple in Wellesley, started in the spring of 1960. At the ground-breaking ceremony, Reverend Carl J. Nelson, minister of the Wellesley Universalist Church that had graciously housed many JCG activities, gave the invocation, referencing the Bill of Rights, “Let us honor our many differences and find our unity in our humanity. Whatever our individuality in person, race, nation, or religion, let us remember that we are brothers.”

Amazingly, by the fall of that very same year and in time for the High Holy Days of Rosh Hashanah and Yom Kippur, Temple Beth Elohim (TBE) opened it doors. Seventy-two founding families had a new home, complete with a sanctuary for 300, five classrooms for the religious school, a Rabbi’s study, and a kitchen.

Despite two additions, by 2000, the temple was not able to meet the educational and spiritual needs of its 600 member families. And, for the past several years, the building has been literally “bursting at the beams” with close to 920 member families and 650 children in the religious school, 50 percent of whom are from Wellesley and Weston. In fact, TBE has had to reach out to the community once again for space, to the Wellesley High and Middle Schools for High Holy Days family services, and to Schofield Elementary for weekend adult-education classes.

In April 2005, Rabbi Sisenwine, TBE’s head rabbi, approached Susan Solomont, a Weston resident and community leader, to chair a new temple building initiative. Susan and other TBE members, many from Weston and Wellesley, formed a “Makom”(a spiritual home) Committee to steer the effort.

As Rabbi Sisenwine explains, “We didn’t want a larger building — we wanted a building that would enable us to better live our vision of a sacred community. And so the spaces, from the large to the small, are intended to bring people together and integrate our core values of learning, spirituality, and social justice. Rather than have separate spaces for a religious school wing, a sanctuary, a donations collection area…we sought to infuse all of the spaces with all three of our priorities. So, for example, our library is also a worship space that speaks towards our goal of social justice. Finally, our building is filled with windows — to embrace God’s creation of the natural world.”

Cantor Jodi Sufrin of TBE offers a historical perspective for the need for a new building, “Judaism teaches us that the world is sustained by three things: study, prayer, and acts of loving kindness. We need a new Beit Elohim (House of God) so our congregation can open our doors to everyone who wants to participate in Jewish life, and to allow our hearts and minds to grow spiritually. Then we can truly live up to the words, ‘My house shall be called a house of prayer for ALL people.’ ”

Apparently, congregants agree on the importance of a new temple. Approximately 85 percent of member families have donated, ranging from the parents of TBE nursery school children to original founding members, an incredible figure at any time, but especially during tough economic times.

Originally, the hope was to find land in Wellesley or Weston on which to build a new temple – a tall order in two well-developed towns. Luckily, when prospective architects arrived at TBE, many remarked that the current site of the temple’s parking lot, a glacial bowl encircled by trees, was a perfect spot for the new building. 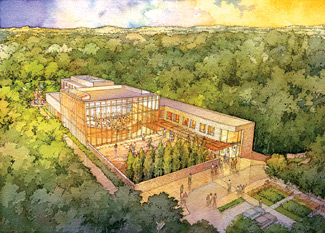 Harriet Warshaw, the lay leader/president of the congregation from 2006 to 2010, had one guiding principle as she led the congregation. “My role was to build community while building a new building — community within our congregation, within the broader Jewish community, and within the town of Wellesley.” Harriet’s longstanding commitment to the Town of Wellesley, including serving on the Board of Selectmen for nine years, was the perfect background for her new responsibilities.

Harriet ensured every step of the building process was respectful to the town—built within existing zoning and by-laws and without variances, respectful to temple neighbors who were invited to learn about and comment on the architectural plans—and respectful to the natural environment by incorporating green materials, energy-efficient mechanical systems, and sustainable landscape design. Ground was broken on October 2, 2009 under the direction of general contractor Richard White and Sons, based in Newton. Stantec landscape architecture services are responsible for the outdoor spaces.

The 42,000 square-foot new Temple Beth Elohim is accessible to all, with features including a canopied drop-off in the front of the building, snow-melting systems for the entry walkways, an elevator, and full handicap accessibility. Technology innovations also provide accessibility, such as listening devices for the hard of hearing in the sanctuary and provisions for remote viewing of religious services at home.

To achieve the seemingly conflicting goal of creating intimacy within a larger space, the new sanctuary is circular in shape. Congregants face each other, with the Torahs, the sacred scrolls of Jewish teachings, in the center. Benches surround the perimeter of the seating, inspired by the benches in the ancient synagogues of Sfat, the birthplace of Jewish mysticism, which the architects and other members of the temple saw on their visit to Israel.

The central, double-height atrium is designed to be the hub of the building, so that everyone – young and old – shares in the energy of all that is going on in the temple community. And, because learning is a congregational priority, classrooms flow out from the atrium in all directions, and worship spaces are only steps away, visible from both the first and second floors. Finally, to connect congregants to the beauty of nature, front and rear exterior courtyards offer space for worship, classes, community events, as well as causal conversations with friends.

Next door to TBE is long-standing neighbor and friend, the Schofield Elementary School. With the new temple building moved to the bowl in the back of the property, the two institutions’ parking lots are now contiguous. To better accommodate overflow parking for both the school and the temple, in the spring of 2011 TBE will build a gate between the two lots, re-stripe the Schofield lot, and install outdoor lights. 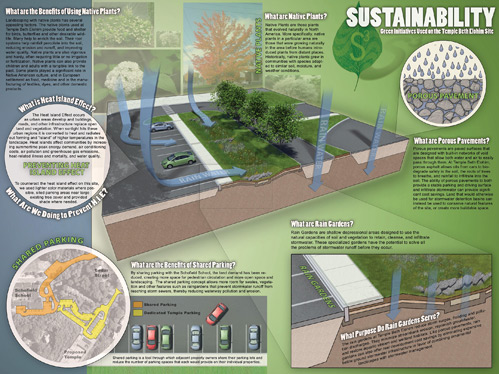 Highlights of sustainable landscape design used on the new temple site as outlined by Stantec, the landscape architecture firm.

While there are numerous innovations in the new temple, including a solar-powered eternal light hanging over the ark that hold the Torahs, Wellesley resident Tom Bloch, chair of the temple’s building committee, shares his favorite features. “The first is the sanctuary, arranged so congregants face each other to enhance the experience of praying together as a community. And the second thing I love is how the building is open, both outside to nature – to courtyards and eco-rain gardens that collect water for irrigation, and inside — around a central atrium connecting people around the many activities that occur daily.”

Just as WellesleyWeston Magazine goes to press, Temple Beth Elohim plans to open the doors of its new building in December 2010. Newsweek magazine recently named TBE one of America’s 25 most vibrant congregations. With members from over 30 communities coming together in their new space, the vibrancy of this congregation’s learning, social action, and prayer can only increase. Fortunately, there is still room for an additional 20,000 square feet of expansion for future generations.

Look for information about Temple Beth Elohim’s community Open House in May, 2011.