Let it Snow! Embrace the Winter with Cross-Country Skiing 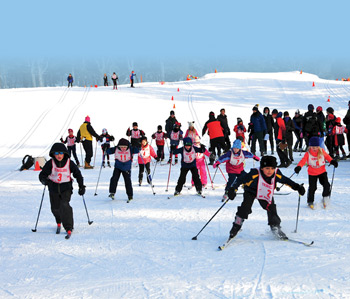 Is it possible for an enormously successful ski area to hide in plain sight? Every winter, the Weston Ski Track provides a colorful backdrop for busy commuters hurrying to and from the Mass Pike. The classic scene of snowy terrain dotted with sleek cross-country skiers is a pleasing sight. But don’t be fooled by its bucolic facade. The Weston Ski Track is a powerhouse, hosting dozens of successful teams and programs, including one juggernaut – the Cambridge Sports Union (CSU) which now is consistently ranked among the very best in the nation.

For many people, the towns of Wellesley and Weston seem to be the very definition of “flatland.” To our northern neighbors, our location is so seemingly warm and snow free that it is often referred to as “the banana belt.” “The mentality used to be that you had to be from Vermont — that you couldn’t be a good skier if you were from metro Boston,” says Hannah Smith, a Wellesley resident who will ski for Williams this year and is a top skier for the CSU team. “It was sort of like, ‘nice try.’” But the Weston Ski Track (WST) works very hard to overcome that North Country mindset. Its fondest hope is to get as many people out on the course as possible. “We offer several hundred sets of ski equipment and snowshoes for rental,” says Larry Smith, president of Charles River Recreation, the company that runs the WST. “It’s a great place to try our traditional classic skiing or the faster skate skiing. In fact, last season over 11,000 folks of all ages took advantage of our rental stock.”

The hope is that once a person schusses around on a bright winter day they will be hooked. It’s a concept that seems to be working. This past winter, the WST had more than 35,000 visitors, 10,000 more than the previous winter. Of these 35,000, more than half are season ticket holders. “The people who get addicted are completely passionate about it,” says Rob Bradlee, the head coach for the Cambridge Sports Union. “It’s a small group but, boy, are they serious about it.” 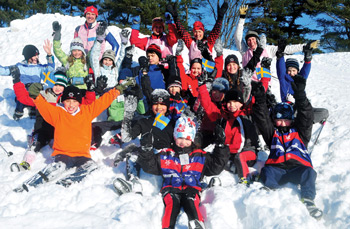 In addition to the thousands of skiers who use WST recreationally, there are ten area high schools that use the facility for practice. The Harvard University ski team comes out from Cambridge to train as well. It is the wide terrain of the park that makes the simultaneous practices possible. “On other ski trails, there is only room for one to two skiers,” says Jim Stock, a coach for the Eastern Massachusetts Bill Koch Youth Ski Club (EMBK) who uses WST as home base. “You can’t go out there nearly as easily with 25 kids. Other ski centers don’t have that open space.”

But a ski park is only as good as its snow and for metro Boston, winter can mean a whole lot of slop. In the mid 1980s, having watched too much slush wash away the ski track’s profits, WST installed snow making for 1.3 kilometers of its facility. After that came night-lights and trail grooming. This ushered in a new era of usability for the ski track. It is now the critical weapon in its ongoing success. “The fact that we have guaranteed snow every winter actually makes us better off than others who live in Vermont or Maine,” says Bradlee. “We know we’re going to have snow. It is completely reliable.” The snow pack gives a long practice season to area clubs and teams and plenty of time for novices to get up on their skis and feel comfortable by winter’s end.

These guaranteed conditions have helped pave the way for a new level of achievement for area athletes as well. The CSU, which trains Nordic skiers from grades eight through twelve, has been quietly building a formidable program for the past several years. Bradlee says, “When I started coaching, we said, ‘Let’s see if we can send two kids to Nationals,’ and we did, and then the next year, we sent two more. Then we jumped to seven, then seven again, and this past year, we sent nine athletes to Junior Nationals.” The sizable number of participants in this highly elite sport speaks to the enormous commitment on the part of the skiers and the coaches. “The coaches’ dedication is amazing,” says Amie Smith, the volunteer coordinator for the CSU and mother to Hannah and Rebecca, who is also on the CSU team. “Think of it: they don’t have kids in the program anymore, it’s completely volunteer, and they are all incredible master skiers in their own right.” Coaches are available for training six nights a week, with each coach managing four or five athletes. 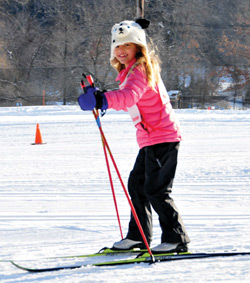 This rigorous formula for training means getting tired teens out of the house on bitter cold nights for an hour and half of practice. What could possibly motivate them to do that? “Well, you can get your homework done,” says Zoe Snow, a Weston high school student who has been to Junior Nationals, “and then you go out and all of the lights are on and it’s kind of a wonderland.” And of course, “there’s always hot chocolate afterwards,” says Weston resident Gavin McEwen, who joins CSU after skiing many years for the EMBK. But uniformly, the skiers talk most about the solidarity with their teammates and the sheer fun of skiing together. “Some of my best friends are on the team so it’s exciting to go to practice everyday,” says Rebecca Smith, a Wellesley resident, “it keeps you motivated.” And the facility itself gives off a positive vibe. “It’s like my community center,” says Snow.

All of this enthusiasm and initiative has morphed an average suburban team into a highly disciplined club that has now produced two National Champions: Corey Stock of Lincoln and Hamish McEwen of Weston, and five athletes who have achieved the status of All American, finishing in the top ten. “WST and CSU played a huge role [in my success],” says Hamish. “WST is run by a helpful and awesome staff and CSU helped me rise up with excellent coaching and race support.” 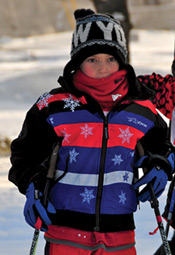 Hamish and other skiers’ rise through the program is part of a clear and logical progression. In a sport that Rob Bradlee calls “extremely complex,” the athletes who start in the early grades are at a distinct advantage over those who come to the sport in their teens. “It’s like learning a language,” says Bradlee. “You learn it when you are three and you’re fluent, you learn it in high school, you’ve always got an accent.” The Bill Koch Youth Ski Club’s sole purpose is to get young children up and comfortable on skis. “We give instruction to any kid who signs up. It is up to them to take it to the next level,” says Jim Stock. “If they want to do some recreational skiing in the woods in Vermont with their family, great, we will teach them that, but if they are competitive, we will give them those racing opportunities as well.” This model has proved to be extremely popular. Last year, the Bill Koch Youth Ski Club at the WST had 170 club members with approximately 20 children in each age group. And life lessons seem to come with the territory. “You have to push yourself to keep going,” says Oliver Snow, an eleven-year-old Wellesley resident and a Bill Koch member, “but if you do you can reach your goals.”

In New England, winter gives over its charms in small doses and we learn to humbly accept them. The sight of an electric blue sky over fields of fresh snow can awaken even the most dormant among us to escape stale interior spaces and get moving. The Weston Ski Track, ten minutes from downtown Boston and within ten miles of millions of people, offers a chance to do just that. “Winters are long in New England,” says Jim Stock. “Cross-country skiing is just a great way to explore the outdoors.” Zoe Snow says, “Half of the fun is just nature walking.”

But for a sport to endure, it must be more than just a glide in the woods. “It’s a total blast,” says Bradlee. “People think that skiing at Weston must be boring but it is more fun than many courses up in the northern mountains. Please remind people that skiing is really, really fun.” The “try it, you’ll like it” mantra infects anyone who has been bitten by the Nordic ski bug. Zoe Snow says, “It would be great to have more people come out and ski. When you are skiing and it is all going well, you feel like you are on top of the world.” 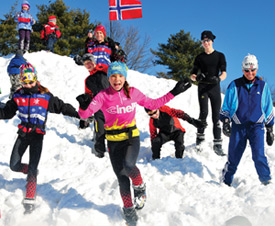 Every week, the Weston Ski Track is home turf to some inspiring novice skiers but maybe none more so than the local disabled veterans who are participating in a novel adaptive ski program. Funded by a grant from the Veterans Administration and the US Olympic Committee, the program has tapped a tiny handful of ski areas to promote skiing for those with physical disabilities. This past winter more than 35 skiers were paired with physical and occupational therapists as well as members of the Harvard Ski Team to work on overcoming significant physical challenges in order to garner the benefits of Nordic skiing. “I am set up for a much larger capacity,” says Eileen Carey, director of the program. “There is a lot of opportunity for growth.” Carey wants to expand the program in the future to include a wider range of need. She says that there is such positive feedback from skiers and the volunteers who work with them that she already considers the program a success. For more information, go to http://adaptive.nensa.net.

If you are eager to try other area trails and touring centers, here is a partial list. Come winter, all of these areas offer a huge array of ski trails (some are groomed trails with pre-set tracks; others are nature trails that welcome skiers but don’t make specific accommodations for them). Check out their Web sites for address information and maps. 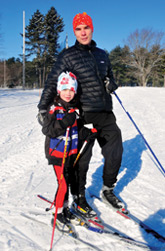