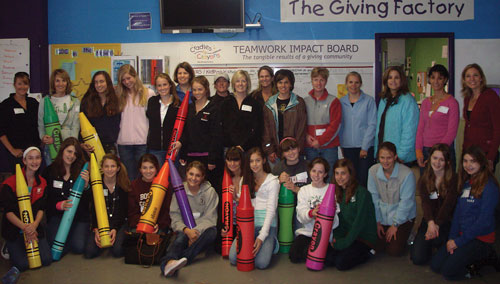 Perhaps there’s no relationship quite like the mother-daughter bond. For both a mother and a daughter it can be a continuously evolving source of empowerment, fulfillment, and joy. At its best, it’s an almost sisterly connection. At its worst, the relationship can resemble that of sparring partners.

Two years ago, the seeds for a local chapter of an august national society of mother-daughter volunteers were sown in Wellesley. The response has been enthusiastic, thanks to its dual mission of service and the promise of expanding the union that many mothers and daughters share. The National Charity League, Inc. (NCL) is a nationwide organization comprised of mother-daughter volunteers who partake in good works in their community. “It’s a very popular association in Texas and California, with many other chapters found across the United States, but there wasn’t really a presence here,” says Cheryl LaMee Ludwig, who arrived in Wellesley from Austin, Texas three years ago.

Indeed, there are over 40,000 NCL members in 17 states, all of whom share a desire to roll up their sleeves and invest hands-on hours into their local neighborhoods. Based on her previous experience with the group, Ludwig took the initiative by exploring interest around town. “I thought the NCL would be perfect for a place like Wellesley, where I had already noticed how generous people were with their time in terms of volunteering,” she says.

Her one e-mail to a small group of women swelled into critical mass. “I didn’t know that many people yet, but everyone passed the word along, and before long, we had fielded twelve women to establish a board for the Wellesley chapter,” Ludwig recalls. 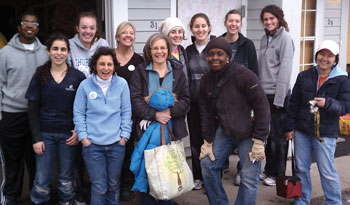 National Charity League members roll up their sleeves for a Habitat for Humanity project in Dorchester last winter.

Laura Fowler agrees. “It has really been a fun year creating our outpost of NCL from the ground up.” Fowler, a mother of three daughters, was one of the earliest enthusiasts for a establishing a new chapter in Wellesley. “We have a very organized template created by the national NCL headquarters in Costa Mesa, California, and they have been very supportive.”

From its humble beginnings in January 2010, the Wellesley NCL quickly thrived, achieving a membership of 250 mothers and daughters combined, and partnerships with 16 different nonprofits in Eastern Massachusetts. From the American Red Cross Food Bank to Wellesley Friendly Aid, and many in between—such as the Special Olympics, Habitat for Humanity, and the Ronald McDonald House—mother-daughter teams are making an impact while cultivating leadership skills and growing through cultural experiences.

Since joining NCL and venturing out into the community together, many mothers have noticed a significant change in their daughters. “NCL offers me a powerful opportunity for my daughter Shannon and I to work together, and for me to witness sides of her I wouldn’t normally see,” confirms Janet Seidl, a current member. “I have really seen her grow as an individual.”

Seidl and her daughter, a student at Newton Country Day School, have interacted with children at the Epiphany School in Dorchester, an independent, tuition-free middle school, and have also served clients at the Red Cross Food Bank in Boston. “We gain so much by interacting with those that we are serving,” Seidl says. “And NCL makes giving back simple and fun.”

Suzanne Picher, a member of the board of the Wellesley NCL, and a co-chair of its philanthropy arm, has invested significant time in NCL, working alongside her 15-year-old daughter Maddie. “For me, giving back to the community is both a privilege and a right,” she says. “I love the fact that it has exposed the girls, and all members, really, to places they’re not familiar with.”

Maddie Picher, who attends Wellesley High School, has traveled with her mother, along with several other mother-daughter teams, to a food pantry in Boston. “We spent time sorting donations from the Greater Boston Food Bank into different bags, and presenting three days’ worth of food to people who need it,” says Maddie. “The communication was amazing—the recipients, including small children with their parents, were so grateful for the food.”

“This kind of volunteerism shows us a different way of life, and helps the girls think about human dignity and appreciating each other for who we are, not what we have,” says Suzanne. “It’s really meaningful work.” 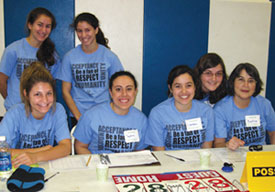 Picher and Fowler collaborated to figure out which organizations would be a good fit for NCL’s volunteering efforts, and to establish a relationship with each organization that would be meaningful for the charity as well as NCL’s members. “We are engaging in philanthropy across a broad spectrum, from the elderly and disadvantaged to people who have different challenges,” says Picher. “We aim for a broad spectrum, and include projects that are health-related, such as staffing the Jimmy Fund walk in September and the Pan-Mass Challenge Ride for Kids each spring.”

Picher also points out that charity begins at home. “We’ve also made sure that not only do we reach out to communities different from Wellesley, we want to benefit our own neighborhoods as well.” NCL members have been increasingly active with Wellesley At Home, a local group that helps seniors stay in their home, performing work like gardening and outdoor upkeep.

“It’s especially exciting for us to be a part of helping local seniors stay in their homes, because as we mature as a society, grandparents often are not located in the immediate area,” she says. “And we are building relationships between the three generations.”

“Suzanne and I have really learned a lot on our journey,” adds Fowler.

What differentiates the NCL from other volunteer organizations is not simply their volunteerism, nor their hands-on approach. As Cheryl LaMee Ludwig points out, “It’s the chance for mothers and daughters to perform significant deeds together and, on a more social level, teen girls who attend school outside of Wellesley can reconnect with their peers in town.”

No fewer than ten schools are represented by the adolescent girls who comprise the younger end of NCL’s membership. The largest coterie comes from the public middle and high schools in Wellesley, but the population also hails from Newton Country Day, Dana Hall, Buckingham, Browne & Nichols; Beaver Country Day School; the Winsor School; Meadowbrook School; and Noble and Greenough school.

“It’s terrific for the private school girls to get to know the others in their residential community, and it’s social for the moms as well,” Ludwig says.

Young women must be in at least seventh grade to join NCL. Membership is roughly $200 per year for a mother-daughter pair. “I have three girls, so it has been great to volunteer with each of them,” says Fowler. “It’s been a real win-win for us, because we’re doing great community service, while my girls are acquiring leadership skills.”

In total, the Wellesley NCL has 16 different partnerships with nonprofits. During the 2010-2011 season, volunteers logged over 6,000 community service hours. “One of the most exciting things we participate in is the Special Olympics tournaments,” says Ludwig. “We’ll perform the scoring, or whatever else is needed, including the cheering!” Winter basketball takes place in Worcester, while summer track and field events occur at Harvard University. “We had a strong presence at both,” she says.

Cultural experiences are also part of the NCL agenda. Last year, high school students spent a day with the docents at the Museum of Fine Arts in Boston. “There’s also an annual mother-daughter tea, which all chapters across the U.S. enjoy,” says Ludwig. While it’s a chance to delight in the company of their daughters, other teens, and fellow NCL mothers, the Wellesley chapter is hoping to stage their next annual tea with a charitable organization for seniors.

“We are so fortunate to live here and we have so many gifts and blessings, and it’s important to share those,” Picher concludes with conviction.