Sewing is Back in Style: Abby Glassenberg 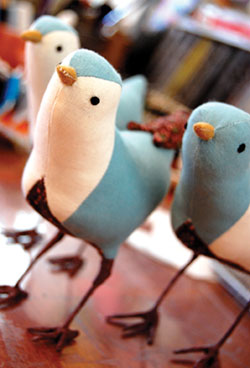 Despite Wellesley resident Abby Glassenberg’s original plans to be a teacher and her stellar academic achievements—graduating Phi Beta Kappa from Johns Hopkins University, winning a Fellowship for a Master’s degree in Education from Harvard—she traces her true passion to a not-so-stellar performance in an eighth grade Home Economics class. “I did horribly in it,” she laughs. “I think I got a C-minus—we had to make Bermuda shorts, do you remember them? I loved that class, and as a result I bought a sewing machine with my Bat Mitzvah money.” She still uses that trusty machine today, a Burnett 330—very simple, solidly made. A workhorse.

No one in her family sews, “but that was good,” she explains as we chat in her serene living room—you’d never guess she has three small children—surrounded by modern art that she and her husband select together. “The fact that I didn’t have anyone to teach me forced me to figure out everything for myself. Which, it turns out, is the fun part for me.” She remembers another childhood episode at the sleep-away camp she attended, where they gave open-ended art classes in a big barn. She made a bee-line to the fabric, found soft, fuzzy-stretchy material, and created a black-and-white dog with a red collar, the embryo for her array of stuffed animals—not just any stuffed animals, but the sophisticated soft toys and bird sculptures that fill her studio today.

On her Web site she explains her love of turning utilitarian fabrics and discarded objects into something new. “Many of my soft sculptures are sewn from recycled and found fabrics.” She turns to me with a wry smile, “I love all the junk that you pick up in church rummage sales and the recycle part of the Wellesley dump.” 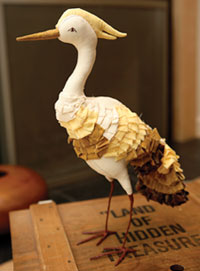 Throughout her travels on the sea of intellectual pursuits the burgeoning artist in Abby kept popping up like a seal. Although she wrote her senior thesis on the desegregation of Baltimore Inner City Public Schools, she gobbled up every art class Johns Hopkins had to offer. Her favorite was a sculpture class, where students were asked to use recycled materials. She designed a huge alligator out of corrugated cardboard, and a great big chicken out of shish-kabob skewers. She ended up winning a Johns Hopkins art award the first year it was given. Abby, in all modesty, laughs “probably because I was the only History Major who ever took so many art classes.”

Not only did she gravitate towards every after-school arts program she could find, she started them for her students everywhere she taught. This included the underfunded Greenwood Middle School in Greenwood, Mississippi, when she worked for Teach For America after college. She taught grades five through eight and founded Greenwood’s literary magazine. She started an origami class at the Brown Middle School in Newton Center at her last teaching job before giving birth to her first daughter in 2004.

At that point the artist in her burst through, leading her to follow what’s now her creative passion: soft toys, hundreds of them: alligators, lambs, lions, leopards, horses, puppies, rabbits, monkeys, whales, fantasy birds in flight, bird sculptures of all kinds, schools of fish, elephants, penguins. Each animal is different, so no two puppies, or rabbits, or monkeys are alike.

“I’d stopped teaching but I always need a project. Luckily for me, blogs were just getting started the winter of 2004-2005.” With her husband’s help Abby looked around the internet for crafts blogs but found very few. So she did some research and decided to start her own. She hired a Hosting Service called TypePad, which charges a minimal amount each year to manage the details for maintaining a blog.

She named the blog “While She Naps” (www.whileshenaps.typepad.com) and started chatting about just that: everything she did while her baby daughter napped. Soon people answered, posed questions, and gave advice. Abby delighted in finding a community of artists and young mothers, which included others who like to sew and craftspeople who traded ideas, helped each other out, and formed friendships. “The blog is great,” she says, “it’s like a hungry mouth always lurking, needing to be fed. It acts like a deadline and keeps me accountable.” 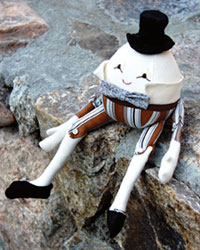 She pauses. “Sewing is a catharsis for me. I’ve always moved at high speed, and it forces me to slow down. You have to do every step of a pattern right or you’ll have to rip it out and start all over.” She started posting pictures of stuffed animals on her blog, and selling them through an online market for hand-made items called Etsy (www.etsy.com/shop/whileshenaps), which makes it simple to set up a shop and sell merchandise securely through PayPal.

Abby reflects back on her first soft toy designs. “Not knowing the rules helped,” she says. For example, initially she ignored the fabric’s grain direction so some of the animals’ necks would curve in a weird way that she liked. Her first original design was a monster. Having decided she was not interested in mass producing to sell, or doing custom orders, she combed the shelves at Barnes & Noble to find a handbook on soft toy design. There were plenty of books with patterns, but nothing on how to create a pattern that you design. 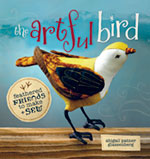 Cover of the The Artful Bird: Feathered Friends to Make and Sew

What to do? Once again Abby reached back to her liberal arts education where she learned how to do research and write, did a Google search on how to do a book proposal, and sent one out. One company gave her a counter offer. She’d had an exhibit of her sculptural birds at the Wellesley Free Library, and the company suggested they do a book of the patterns of those birds. Her book The Artful Bird: Feathered Friends to Make and Sew (Interweave Press) came out in January 2011, a month after her last baby was born. As she says, her blog gives her a ready-made audience: she is now being asked to give shows and teach workshops all over the country.

With The Artful Bird’s success, Abby realized she could now write the book she’d always wanted to read, a handbook for creating your own soft toy design patterns. She has a contract for that book, which will be published in 2013. In her studio she has already organized a series of boxes of animals, one box for each chapter. Each species of animal moves from simplest to most complicated, one animal at a time.

“It never occurred to me you could do this for a career,” she beams. “I’m doing exactly what I want, being a stay-at-home mom and following my passion.” The huge imaginative family of creatures Abby created nuzzled her into a career she never dreamed of. “When I mention sewing most people think I do mending or make dresses for my children, but no,” her eyes flash, “I make animals and birds.”