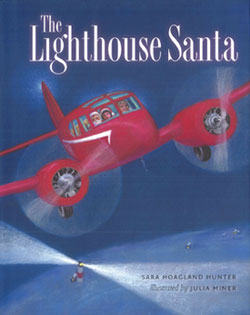 On christmas morning in 1936, Edward Rowe Snow took his first flight as the “Flying Santa,” dropping presents from his rented twin-engine aircraft into the skies above the lighthouses that dotted New England shores. Living in those lighthouses through long, cold winters were the children of the Coast Guard fathers who were charged with keeping the lighthouse lights aglow. To these children, who lived in remote locations isolated from the caroling, tree decorating, and shopping festivities that signal the holiday season for many families, Snow’s air-bound presents of dolls and games and books (as well as fresh coffee for their mothers and razors for their fathers) were a magical symbol of Christmas. Over the course of five decades, Snow missed only one Christmas mission due to an injury he sustained in Northern Africa during World War II. So determined was Snow to never miss another flight that he obtained special dispensation from the US Army to fly over the lighthouses despite wartime restrictions. The flights were risky, and they came at considerable financial cost to his family, but Snow continued flying every year until his death in 1982. Today, airspace regulations prohibit aircrafts from circling over lighthouses, but the deliveries continue via helicopter by a group named “Friends of Flying Santa” who are dedicated to keeping Snow’s message of Christmas spirit and generosity alive.

Equally dedicated is Weston resident and author Sara Hoagland Hunter. Hunter first learned about Snow’s flights while attending Milton Academy where Snow’s only child, Dolly, was also enrolled. The story of the Flying Santa stayed with Hunter for years and inspired her to write the just released children’s book, The Lighthouse Santa (Flying Dog Stories & University Press of New England, September, 2011), which is sure to become a Christmas favorite and bring the legend of the Flying Santa from New England’s shores to children around the world. Beautifully illustrated in rich pastels by Lincoln-based artist Julia Miner, The Lighthouse Santa tells the story of Kate, a young girl who lives with her brother and parents in the Great Point Lighthouse on Nantucket. Despite a terrible snow storm that blows onto the island on Christmas Eve, Kate never loses faith that the Flying Santa will bring her what she wants more than anything else in the world – a best friend. With Kate’s repeated refrain that “Nothing is impossible on Christmas Eve in a lighthouse,” Hunter cuts to the heart of the holidays by highlighting the importance of family, friends, and a touch of magic, of course.

The story is set in a simpler time when entertainment came from a piano in the living room and quilts were warmed in front of a wood stove. Kate’s bedroom contains books and a few stuffed animals. A hand-sewn quilt decorates her twin bed. “One of the things that inspired me so much about all these children growing up in the 1930s and 1940s in the lighthouses,” explains Hunter, “is the spirit that grew in them of appreciating what is important in life and in the natural world. They were cut off from a lot of material culture so they had a sense of Christmas that had little to do with things.” 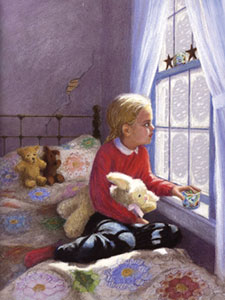 The Lighthouse Santa, however, is as much about place as it is about spirit. Local children will delight in recognizing the unique glow of the strong December morning sun reflecting off fresh snow banks and the sea gulls circling the peaks of weather-worn lighthouses. They will relate to the scarves, hats, and mittens that wrap the children’s bodies while large snowflakes whirl through the wintry air. It is a book that could only be set in New England, and that is exactly what Hunter and Miner, both of whom have extensive ties to the area and raised their children here, intended. The women took repeated scouting trips to the Great Point Lighthouse in Nantucket, climbing the lighthouse in the dead of winter to get a feel for the light.

“A sense of place speaks out to people,” says Hunter. “The more local you can make a book and the more powerful the sense of place, the more universal the story becomes,” she adds. This is why Hunter took such care to include local names like Cross Rip and Tuckernuck shoals and Miner spent so much time studying the coastal landscape and researching every aspect of her illustrations – from the exact model Cessna Bobcat plane that Snow flew to the type of hats worn by men in that era. Inspired by one of her favorite children’s book authors, Robert McCloskey, author of Make Way for Ducklings among other titles, Hunter knew that in order for The Lighthouse Santa to stand the test of time, it had to be more than a sweet Christmas story. It also had to be authentic, so that it would resonate with adults as well as children.

The possibility of The Lighthouse Santa becoming a Christmas classic hits an emotional chord with Hunter. Her two children are grown, and they have put their family home in Weston up for sale. “This comes at a tender time,” says Hunter. “I’m moving beyond the parenting and childhood of my own kids, so it makes it doubly wonderful to be reconnecting with children at book events and signings and so on.” And there will be events aplenty. This November and December look for Hunter and Miner at local bookstores, libraries, craft fairs, and schools, where they will be sharing the lore of the Flying Santa and inspiring a new generation of children to believe that nothing is impossible at Christmas, whether in a Nantucket lighthouse or anywhere in the world. 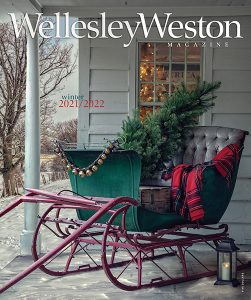