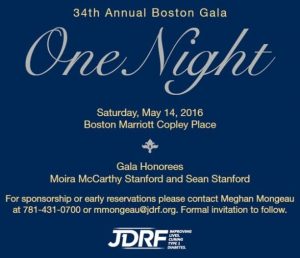 JDRF’s New England Chapter is proud to announce that Moira McCarthy Stanford and Sean Stanford, long-time volunteers and parents of a daughter with type 1 diabetes (T1D), along with Dana Ball, CEO of an organization dedicated to uniting patients with research to accelerate better treatments and care, will be recognized on May 14, 2016 at One Night, JDRF’s 34th Annual Boston Gala, for their steadfast commitment to curing, preventing and treating T1D.

Moira and Sean, whose daughter, Lauren, was diagnosed with T1D when she was just 6-years-old, will be the honorees of JDRF New England’s flagship event, which takes place at the Boston Marriott Copley Place and will be emceed by Anthony Everett, the Emmy-award-winning anchor of WCVB’s show Chronicle.

Moira and Sean have committed boundless hours and resources to support JDRF in its mission to help people like Lauren live healthier, improved lives. In 1997, they began a Boston Walk fundraising team which initially raised $486 and has since grown to more than $130,000. Moira and Sean chaired the Boston Walk multiple times, and their family has regularly delivered JDRF’s Bags of Hope, which contain supplies and education materials for newly diagnosed families. In 2000, Moira joined the New England Chapter’s Board of Directors, where she served as its advocacy team chair and president. She also chaired JDRF’s National Government Advocacy and Outreach program and its speaker’s bureau. In 2007, she received JDRF’s International Volunteer of the Year award.

“These past 18 years haven’t been an easy road in the least. T1D can be a debilitating disease for those afflicted with it, but also for the families who struggle to find the best ways to support their loved one. But this experience challenged our family to do things we might not have done otherwise,” Moira, an award-winning reporter and magazine writer, explains.

For example, she has travelled across the country to speak on behalf of JDRF, and in 2005, the Stanfords became the Chair Family for JDRF’s biennial Children’s Congress. They participated in JDRF’s Ride to Cure Diabetes, where Moira recruited so many new riders she received the Yellow Jersey for top recruiter, and the prestigious Rose Promise Jersey for the most dedicated JDRF rider.

“One of my greatest experiences through all of this occurred just last summer,” Moira says, “when Lauren and I finished the 100-mile JDRF ride in La Crosse, Wisconsin together.”

Dana Ball, who has spent 30 years as a patient advocate, and the past 15 as a non profit executive, will receive the Nancy Jones Diabetes Champion Award for his commitment to driving innovative programs to combat T1D.

“The mission of T1D Exchange is very simple. We want to improve outcomes for everyone affected by type 1 diabetes. We want to reduce the burden, and we want to accelerate the most promising research that will create a worry-free life for people with type 1 diabetes,” Ball says.

In just five years, Ball has made T1D Exchange a globally recognized and highly credible resource in the T1D medical and research community.

This year’s Gala, which aims to raise more than $1.75 million, will feature a cocktail reception, seated dinner, silent auction, and a Fund A Cure auction, which uses the money raised to directly fund T1D research. One of Boston’s most requested event bands, One Step Ahead, will perform, and there be a special performance by blues, country, folk and rock singer, Crystal Bowersox.

For more information about the 34th Annual Boston Gala, or to support the event, visit here.

About JDRF
JDRF is the leading global organization funding type 1 diabetes (T1D) research. Our mission is to accelerate life-changing breakthroughs to cure, prevent and treat T1D and its complications. To accomplish this, JDRF has invested nearly $2 billion since our inception. We are an organization built on a grassroots model of people connecting in their local communities, collaborating regionally for efficiency and broader fundraising impact, and uniting on a national stage to pool resources, passion, and energy. We collaborate with academic institutions, policymakers, and corporate and industry partners to develop and deliver a pipeline of innovative therapies to people living with T1D. Our staff and volunteers in the JDRF New England Chapter, and in more than 100 locations throughout the United States and our six international affiliates are dedicated to advocacy, community engagement and our vision of a world without T1D. For more information, please visit our site.