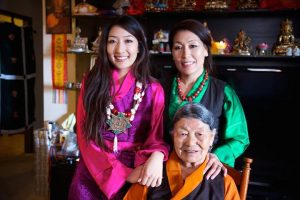 Fashion meets film on Thursday, June 25, from 6:00-8:30 PM at an evening devoted to Tibetan culture presented by Belmont World Film. Hosted by the Sara Campbell store in Wellesley (200 Linden Street), the event features highlights from filmmaker Marilyn Pennell’s The Way Home: Tibetans in Exile, her documentary about three generations of Tibetan women in exile in the US and their struggle to preserve their culture, family and faith far from their homeland. Pennell will also speak about her experience making the film. Tibetan snacks and a live performance by one of the members of the Tibetan Institute of Performing Arts (TIPA), the very first Tibetan cultural institution in exile, round out the evening’s festivities.

A 20-year film and television production veteran, Pennell was selected to serve as a Fulbright Hays fellow in the history and culture of China in 2006. Her experience traveling throughout China and the Tibetan Plateau sparked her interest in Tibetan culture and led to the production of the film. Shot over two years in Washington, D.C., India (Dharamsala in the north and Bylakuppe in the south, Tibetan communities that formed after the Chinese takeover), and the Bay Area in California, the film is about courage, compassion and hope in the face of overwhelming odds. It also demonstrates how Tibetans honor and preserve their cultural heritage through the practice of singing, dancing and traditional Tibetan Opera.

Sara Campbell will donate 10% of all sales during the evening to Belmont World Film, an international film series that promotes an appreciation and understanding of other cultures through the powerful language of film. The 501(c)(3) nonprofit corporation presents award-winning feature films, documentaries, animation, and shorts from around the world for both adults and children enhanced by topical speakers, cultural performances and ethnic cuisine.

All of Sara Campbell’s clothing is made completely in the USA, and the company regularly gives back to the community through participation in charitable and other fundraising events in their own stores and beyond, while creating and delivering not only a unique and beautiful product, but also a transformational shopping experience.

The event is free and open to the public. For more information, visit www.belmontworldfilm.org or call 617-484-3980.

Belmont World Film is a 501(c)(3) nonprofit corporation that promotes cross-cultural understanding through the powerful universal language of film. It presents award-winning feature films, documentaries, animation, and shorts from around the world for both adults and children enhanced by topical speakers, cultural performances and ethnic cuisine.