The Revolutionary era Golden Ball Tavern Museum will host its 50th Annual Holiday Open House on Saturday, December 5, 2015 from 1 – 3 pm. The nearly 250-year-old Tavern, on the original Boston Post Road, will be decorated in holiday finery courtesy of the Country Garden Club of Weston. The CGC has been involved with this popular community event since it was first held in 1965. The 50th Anniversary Open House will feature a “Golden” theme and, as always, it will be free and open to the public. Complimentary tours of the historic Tavern will also be available.

Built in 1768, the Golden Ball Tavern was established and operated by Tory turned Patriot, Isaac Jones. The Tavern played a pivotal role in the unfolding of the Revolutionary War when it served as a base for British spies. The house and Tavern were later occupied and carefully preserved for 200 years by 6 generations of the Jones family. The Tavern is listed on the National Register of Historic Places and is entirely self-sustaining.

The Holiday Open House is a prelude to the Golden Ball Tavern’s members-only Wassail event on Sunday, December 6th. Please consider joining today; memberships are available through the website at www.goldenballtavern.org. 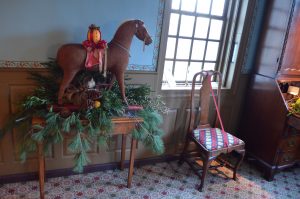 Photos above courtesy of David Valovcin