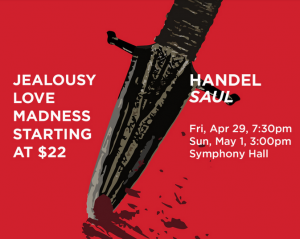 Artistic Director Harry Christophers and the Handel and Haydn Society present the H+H premiere of Handel Saul at Symphony Hall on April 29 and May 1. The dramatic oratorio tells the Old Testament story of what happened after David defeated Goliath, and how that led to the downfall of Saul, the first king of Israel.

Handel composed the piece in 1738 in collaboration with Charles Jennens, the writer who would later craft the libretto for Messiah. Saul contains well-known numbers including “The Dead March.”
The international cast of soloists includes bass-baritone Jonathan Best as Saul, countertenor Iestyn Davies as David, tenor Robert Murray as Jonathan, soprano Elizabeth Atherton as Merab, and soprano Joélle Harvey as Michal. Murray, Atherton, and Harvey are reprising their roles from Harry Christophers’ acclaimed 2012 recording of Saul with The Sixteen, and The Telegraph called Davies an “undoubted star” in a recent Glyndebourne production of Saul.
The H+H Period Instrument Orchestra grows its forces for these concerts, bringing to the stage an expanded brass section and unusual instruments including Baroque triple harp and carillon (a keyboard instrument that sounds like bells).
H+H’s Young Women’s Chamber Choir joins the H+H Period Instrument Orchestra and Chorus for select choruses in Act I. The Young Women’s Chamber Choir is part of H+H’s Vocal Arts Program and is made up of high school students from the Boston area.