Wellesley Residents featured in Local Production of the Musical “Nine” 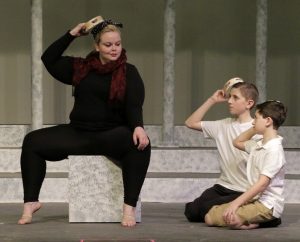 Wellesley residents Cathy Merlo, Jackson O’Toole and Jason Saperstone will all be seen performing in Arlington Friends of the Drama production of Nine, which opens next week. In this Tony Award-winning show, a famous film director is suffering from a creative block – and personal difficulties with his wife, mistress, the actress who serves as his muse, and his female producer. A musical adaptation of the Federico Fellini film “8 ½” this theater piece tells the story of celebrated film director Guido Contini as he is pursued by hordes of beautiful women, all clamoring to be loved by him and him alone. Combining elements of opera, concert, storytelling and theater into a mixture of straightforward narrative, memory and dreams, in many ways this show defies categorization, yet in the end it all fits together in an award winning show.

Merlo plays Stephanie Necrophorus, a film critic who has been particularly harsh on Guido’s latest films which have been artistic and box office flops. A contralto singer who has been in over forty community theater productions in the metro-west area, this is her AFD debut. Also new to the AFD stage are two of the youngest members of the cast. Jackson O’Toole, who plays young Guido’s friend, is a 7th grader at the Wellesley Middle School where he has performed in several school shows. This is his first time doing community theater and performing with adults. He finds he likes working with talented people that have the same love for theater that he does.

Jason Saperstone is a 6th grader the River School in Weston. In this production he plays Guido Contini as a nine-year-old boy (hence the title Nine). As a boy soprano, he is in two musical numbers, “Be Italian!” a scene where he and his friends sneak out of school to encounter a local prostitute, who tells them they must live and love fully to be Italian, which becomes a formative moment in Guido’s life. At the end of the show Saperstone also sings a duet with his older, grown-up self, called “Getting Tall,” another pivotal moment in the show when Contini has to let go of his inner child if he is to grow into a mature man, and a mature artist. Jason has also been in children’s theater productions with the Wellesley Theatre Project, but this is his first time in community theater as well.