Noble and Greenough School will host a reception for the art exhibit, Between Worlds:  Art from the South Sudanese Refugee Community, on April 14.

“This is an important body of work as it captures the experience of the South Sudanese people from the anguish of the country’s civil war through to the hope that is coming from the vote this past January that calls for South Sudan to become a free and independent country this July,” explains Morgan Henderson, a senior in high school from Wellesley and one of the organizers of the exhibition.

The vote is part of the 2005 Peace Accord that ended what had been Africa’s longest running civil war.  Sudanese at home and throughout the world are living between worlds as they move forward, hoping for a peaceful transition. More than two and a half million people have been killed and another four million displaced by this conflict.

Most of the paintings in this exhibit were completed by displaced young persons and reflects their experiences of living between worlds:  worlds that contrast war and peace; village life and refugee life; family life and life as “lost” boys and girls; traditional and modern cultures; and life before and in anticipation of independent statehood.   “We hope that that the first-hand accounts of recent events in Sudan in this exhibition will also more deeply educate our community about the South Sudanese people and of the importance of supporting people’s desire for freedom while also preventing genocide,” explains Julia Weber, a senior at Nobles who has also helped to organize this installation.

The reception is free and open to the public and will take place in the Arts Center at Nobles, 10 Campus Drive, Dedham, from 4-6:30 pm.  For more information, see www.nobles.edu/sudaneseart. 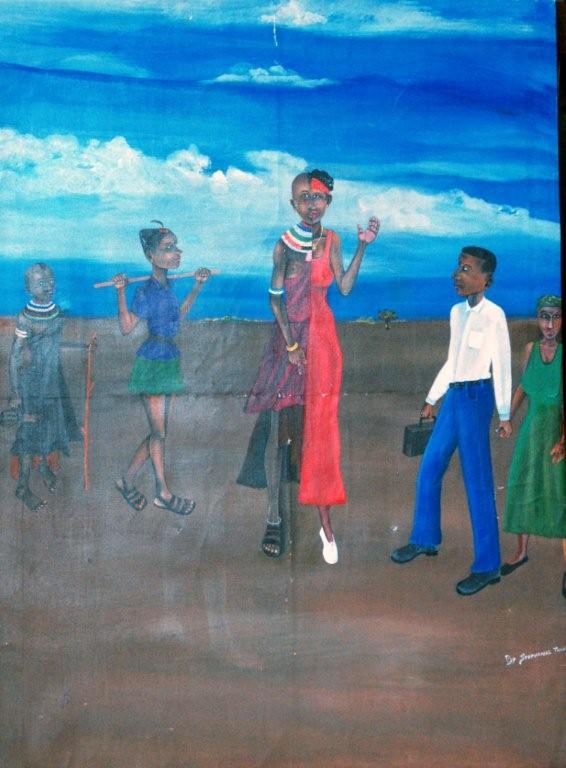