Walking Trails in Weston and Wellesley

By Lewis I. Rice
Photographs by Peter Baker & Kristin Burke

Elmer Jones edges his car up to Boston Post Road and waits for a line of traffic to pass. He takes a left and pulls into Weston Station, a place he used to hop on a train to commute 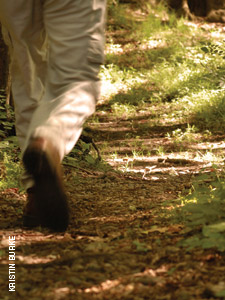 into Boston. Soon he will gaze upon a very different traffic pattern. During a walk through the Sears Land and the Forbes Conservation Land, where he points out flora like ostrich fern, skunk cabbage, wild geranium, and marsh marigold, he looks through a telescope at a muddy flat to see turtles navigating around herons whose wing span can reach eight feet. Not far away, two baby herons look down from their nest in a tree over a clear pond stocked with pike and bass.

“What’s so nice about this,” says Jones, “is that there’s so much in this area.”

Indeed there is. For Weston, known as a town of expensive homes and top-rated schools, also boasts an abundance of conservation land – 2,200 acres of woods and fields containing 65 miles of walking trails, which constitutes about 20 percent of the town. The Weston Forest & Trail Association, an organization that maintains and promotes that wide-ranging area, will celebrate its 50th anniversary with a party in late October in Weston Town Hall. Since its founding in 1955 by 12 people concerned about the sprawl of post-World War II suburban development, the nonprofit organization has worked to protect the rural character of the town.

“We see ourselves as being stewards of the open space,” says Tom Selldorff, president of the Weston Forest & Trail Association. “Everybody in the town is within a stone’s throw of open space, which is one of the really nice features of the town.”
While neighboring Wellesley contains less open space than Weston, it also offers many trails, which are maintained and overseen by the Wellesley Trails Committee. Formed in 1993 by the town’s Natural Resources Commission, the committee develops new trails and maintains an existing trail network.

Osler notes that the network of trails offers residents pedestrian access to Wellesley center from many parts of town, with a cross-town trail that runs from near the border of 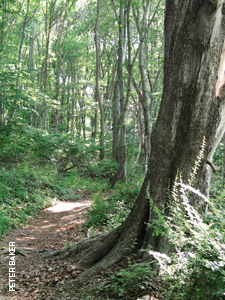 Natick at Morses Pond to the banks of the Charles River in Newton. Other trails include the Centennial Park Trail, which offers a view of the Blue Hills, and the Boulder Brook Reservation Trail near the Weston line, where hikers can climb to the top of the Rocky Ledges.

There are outlets for novices with little feet, with level paths along waterways and town streets, or walkers accustomed to hiking in the woods. The Trails Committee recommends walks for families with kids, such as on the Brook Path, the Carisbrooke Reservation Trail, and the Guernsey Path. The town contains 17 miles of trails in all, with color-coded arrows marking the way.

“I think it’s a tremendous community resource, not just for the recreation, but it binds the town together,” says Osler. “There are people who are drawn to Wellesley because of its schools and its open spaces.”

Few parts of the country offer the “best of both worlds” of the Wellesley-Weston area, says Selldorff, giving residents the opportunity to escape to the woods while having nearby access to a major urban center. In Weston, he notes, residents can also enjoy a variety of experiences in different areas of the conservation land. The Jericho Town Forest attracts cross-country skiers, while Cat Rock and 80 Acres features the most dramatic outlooks with picnicking spots and views of the Boston skyline. For the upcoming fall foliage season, Sunday Woods, near the center of town, provides the best views with its birches and oaks in full color.

No one knows these abundant natural assets better than Jones, 79, a retired chemistry professor at Northeastern University who has written the book on the subject, Walks on Weston Conservation Land. Jones walks the land three to five times a week in good weather, and leads tours for the Council on Aging, the New England Wild Flower Society, and the Appalachian Mountain Club.

His own book was many years in the making, as was his knowledge about Weston’s conservation land since he arrived in the town in 1962. As many times as he has walked on Weston’s myriad trails, each experience is different, he says: “There’s always something interesting down here.” Even the traffic.

QUICK NOTES
Joggers and dog walkers are welcomed on all Wellesley trails. However, there are Town dog restrictions: no more than two dogs per person, and three dogs with a permit. Dog walkers are encouraged to pick up after their dogs and properly dispose of the waste. In Weston, most dogwalkers use the Weston Reservoir trails off of Ash Street.