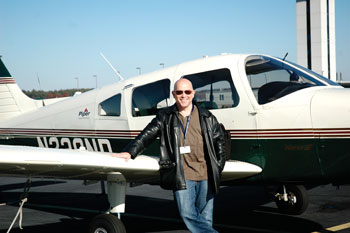 On father’s day in 2005, Eric Parker woke to cries of “Surprise!” His wife and daughters blindfolded him and led him to the car. When they arrived at Hanscom Field in Bedford he asked where they were going. “We’re not going,” they laughed. “You are.” Parker met his flight instructor, went through the preliminaries, and buckled himself into the pilot’s seat of the Diamond Katana aircraft, with his instructor at the dual controls to his right. “About four seconds into the flight, I was hooked,” he says.

Parker soloed for the first time that August. Nine months after his first lesson, he heard the FAA examiner say, “Congratulations, you’re a pilot.” Parker, a Weston resident, is a successful trial attorney in Boston, so why fly and why now? “After working in your profession almost 25 years, you want to learn something new. I can’t think of anything as exciting, interesting, and liberating in every sense,” he says. 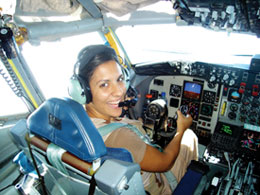 Student pilots generally spend six to nine months with one to two lessons a week to earn a private pilot certificate. The national average is 60 to 70 hours of flight time. In the first lesson, after observing the instructor complete exterior and interior checklists and being briefed on the plane’s mechanics, students often taxi, take off, and turn. Their instructor is in the co-pilot’s seat with a full set of controls. Jim Henry, Parker’s flight instructor at East Coast Aero, says, “When you tell students they’ll take off, you see the white knuckles and then the adrenalin rush. It’s panic to euphoria.” Landing takes more practice, sometimes 20 hours of flight time, and then reality hits home—flying is more difficult than driving a car.

For many, learning to fly in middle age is the fulfillment of a childhood dream. But Philip Kretschmer, Weston High School Class of 2011, is learning to fly at the same time he is learning to drive. At age 16 he is old enough to solo. He has earned more than half the required 40 hours (under Part 61 of the federal aviation regulations) to be tested for his private pilot certificate and this February he will attain the minimum age of 17. Kretschmer earns half the cost of his flight training by pumping ice cream at Dairy Joy. In 2010 he hopes to join an elite subset of the US population, the less than one percent that hold a private pilot certificate.

Investment consultant John Tyler of Wellesley has loved flying since he was a boy. Named for an uncle who was a pilot in the Second World War, the young Tyler amused himself when hospitalized by making a model airplane. His surgeon noticed and later took him flying in his Cessna. Tyler’s wife and young sons are proud that he is a pilot but he isn’t ready to take them up. “I’m a neophyte who is into fair weather flying,” he says. 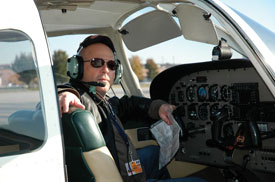 The Right Stuff
The Cessna 172 Skyhawk and 182 Skylane are the most popular trainers in the United States. More than 50,000 have been produced in the United States since the mid-1950s. Both are single engine piston aircraft, with high-wing design that permits great views of downtown Boston, Gillette Stadium, and Great Blue Hill. Newer models are available with the Garmin G-1000 glass cockpit, digital avionics that control and monitor airplane systems. Both seat four passengers, require up to 1,600 feet for takeoff, and have maximum speeds of 120 to 150 knots (approximately 140 to 170 miles per hour).

Training has three phases, explains Ken Dustin, flight instructor at Norwood Flight Center: pre-solo, where you learn to fly the aircraft and land; cross-country, where you fly to different airports, learn navigation, and to whom to talk; and preparation for written, oral, and practical tests. “The best pilots are people used to procedures – boaters, ex-military, emergency responders, but anyone can become a pilot,” Dustin says. “We train behavior, taking students through procedures like building blocks until each becomes a habit.”

John Cronin, a private pilot who trains with Executive Flyers Aviation in Bedford, is a native of Weston and a captain with the Weston Fire Department. He understands being vigilant about safety and following procedures. Since earning his private pilot certificate in 2005, Cronin has added instrument, commercial, and multi-engine ratings. He is half way to his next goal: certified flight instructor. Cronin loves to take his wife, Wendy, on a late afternoon flight to New Bedford Regional Airport. After dinner on the patio at sunset, they make a night flight home to Hanscom. 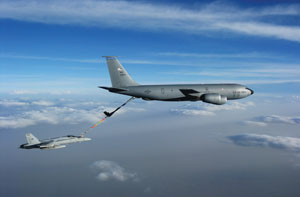 That pleasure is surpassed by the flights Cronin has made for Angel Flight Northeast, the organization that matches qualified private pilots with people needing medical treatment. “Anyone can write a check for charity,” he says, “but how many can fly someone for medical care, saving them hours of travel and traffic?” Angel Flight Northeast, based in North Andover, has a roster of 1,100 volunteer private pilots who have donated 38,000 missions (approximately nine million miles) at no cost to recipients.

For five decades the United States Air Force has maintained global reach with the KC-135 Stratotanker. Akin to a Boeing 707 and modified for aerial refueling, the KC-135 is equipped with a flying boom to refuel aircraft from the F-22 Raptor fighter and A-10 Thunderbolt to the C-5 and KC-10 cargo carriers. Growing up in Weston, Captain Andrea “Annie” Erdekian, United States Air Force, dreamed of becoming an astronaut. Following graduation from Rensselaer Polytechnic Institute (RPI) in 2004, Erdekian completed Air Force pilot training at Columbus Air Force Base in Mississippi and officer training at Maxwell Air Force Base in Alabama.

Erdekian is attached to the 91st Air Refueling Squadron at Macdill Air Force Base in Florida. She is one of seven women in a squadron of 120; six are pilots and one, a boom operator. In three and a half years Erdekian has flown as co-pilot, pilot, and now instructor pilot. “Every time I fly, I love it,” she says. “It’s incredible.” She and members of the 91st Squadron deploy frequently to the Middle East. In addition to being a civil engineer, Erdekian plays the cello and has traveled internationally to perform. 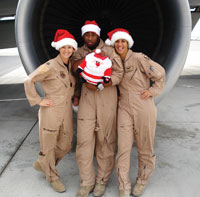 Annie Erdekian (right) and colleagues from the 91st Air Refueling Squadron at Macdill Air Force Base in Florida.

Most of us use the cruising range of commercial jetliners to spread our wings without entering the cockpit. Karin Cody of Wellesley saw that opportunity in her twenties when a college friend who was a flight attendant described her travel adventures. As Cody listened, she recalls, “I saw there was a whole world out there that I wanted to find.” Cody became a flight attendant, and after living her entire life in Boston, welcomed meeting people from different places and backgrounds. After 30 years with American Airlines, she says, “I love the thrill of going down the runway, but I’ll stick with two-pilot planes. And I don’t want to be the pilot.” Cody belongs to the Boston-based flight crew that lost several members in 9/11. “That was a tough time, going to one memorial service after another. We’re a close group.”

According to FAA estimates, there were 613,000 certificated pilots in the United States in 2008. (These are active pilots who have current medical certification.) The total comprises approximately 490,000 private, general aviation pilots; the remainder is airline transport. This number, while up from 9,200 in 1929, has been declining steadily. “The drop in the number of pilot licenses is hard to explain,” says Chris Dancy, spokesman for the Aircraft Owners and Pilots Association (AOPA). “The high of more than 800,000 occurred in 1980. This 25 to 30 year decline could be due to cost and available time and to people’s perceptions.”

Aviation associations hope to reverse this trend. AOPA initiated the “Let’s Go Flying” campaign to demonstrate that flying is easier and less expensive than people might think. Since only 30 percent of students actually get their private pilot certificate, APOA now provides a free mentoring program, “Project Pilot,” to match students with experienced aviators. 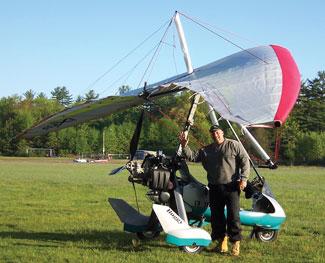 “Flying is a culture of risk assessment and risk management,” Dancy says. “Despite the general perception that being a pilot makes you a daredevil, the pilots I know, by and large, are the most risk-averse people.” Risk is part of life, as local pilots who advise clients on investments, perform life-saving medical procedures, and fight fires well know.

Many private pilots say flying is as safe as riding a motorcycle. To enhance passengers’ understanding of flight and safety, AOPA’s Air Safety Foundation offers a “Pinch-Hitter” course to teach passengers how to operate radio and flight controls and land the plane if the pilot becomes incapacitated.

Flights of Fancy
Fixed-wing pilots say you can never relax when flying a helicopter and radiologist Alex Norbash of Weston would agree. “You can’t be a dilettante,” he says. Norbash, chairman of the department of radiology at Boston Medical Center, became a private pilot 22 years ago and earned his helicopter certificate in 1993. He describes flying as “immersive,” like scuba diving and skiing which he also enjoys. All three, by taking you higher and deeper, give different perspectives on the world and life.

“My helicopter is a magic carpet,” Norbash says of the R-44 Robinson he houses at Minute Man Airport in Stow. It hovers, flies low and slow, has good range, and can land almost anywhere. Norbash frequently flies with his wife Sepi Gilani and 15-year-old twins Noah and Zac on outings. Gilani, a facial plastic surgeon and otolaryngologist at Harvard Vanguard, is the daughter of a private pilot. Their favorite destination is Martha’s Vineyard, where they land on the grass at Katama Airfield, and with picnic basket and towels, walk a few steps to the beach.

In 2005 the FAA introduced the sport certificate and light sport aircraft category that includes fixed wing, weight shift, lighter than air (balloons), and powered parachutes. This option takes less time and expense to get flying and is intended for those who fly purely for enjoyment. Most sport aviators fly fixed-wing planes, two-seaters with a top speed of 130 miles per hour, in good weather, daytime only. For medical certification, a valid driver’s license is considered adequate proof.

Jay Nitenson is an engineer and contractor who has renovated homes in Wellesley for more than a decade. For fun he flies a three-wheeled, light sport weight-shift aircraft manufactured in France by Air Creation. Affectionately known as a “trike,” the aircraft is propelled by a 65 horsepower, 2-stroke engine similar to a ski mobile. The cockpit, open to the elements, has an aluminum frame and fiberglass body with a pilot’s seat and, tucked behind, a jump seat for trainer or passenger. About the size of a motorcycle, the cockpit is suspended from a large fabric and batten wing controlled by the weight-shift bar. Nitenson’s trike is equipped with a safety parachute that can bring the plane and occupants down together. 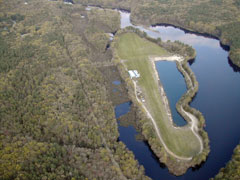 Aerial view of the Crow Island Airfield for sport flying on the Assabet River in Stow. 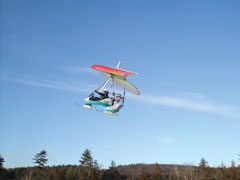 Jay Nitenson takes off in the Air Creation trike that he custom-fitted with skis for winter landings.

From Crow Island Airfield in Stow, Nitenson takes to the air above the Assabet River enjoying distant views of Mount Monadnock and the wooded floodplain below. At speeds of 50 to 75 miles per hour, he usually flies at 800 to 1,500 feet, but he has been as high as 5,000 feet. His favorite time to fly is the hour after sunrise or before sunset when thermals have settled and the air is calm.

If Eric Parker’s wife and daughters hadn’t surprised him with his Father’s Day lesson, he wouldn’t be flying. “It’s easy to talk about learning to fly but it’s hard to do,” Parker says. The joy, pride, and excitement one gets from becoming a pilot and the incredible views from 3,000 feet rather than 30,000 feet are unique. Give it a try! At many flight schools you can take an introductory lesson for a reasonable cost. Even if you decide flying is not for you, you’ll never forget the ride. And if you do progress with lessons, this lesson can be the first entry in your log book.