The first in a series of articles where we explore the history, traditions, and people that create the unique character of each of Wellesley’s distinct neighborhoods. 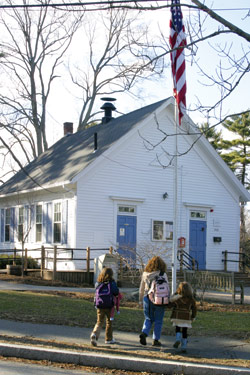 At the intersection of Route 9 and Weston Road, nestled in the midst of a carefully re-created 19th-century garden, stands a little white clapboard building. It looks simple and unprepossessing, but for more than 150 years it has been the historical, educational, social, and emotional symbol of its neighborhood.

This landmark, the oldest public building in Wellesley, is the Fells Branch Library. It actually began life in 1854 as a one-room schoolhouse, first called the Northwest, then Unionville, Blossom Street, and finally Fells School.

At the time, it looked out on a dusty road that was little more than a cart path. Weston Road, then called Blossom Street (because of the beautiful flowers in the yard of Mrs. Mansfield) had only a handful of farms along its entire length from Central Street. While what is now Wellesley Hills was known as “Grantville,” this area was originally called “Pine Plain.” But the farmers didn’t like being dismissed as “Pine Plainers,” so they dubbed what is now known as the Fells “Unionville.”

Wellesley wasn’t even a town then, just a part of Needham. But these farmers were fiercely independent of the rest of Needham, and fiercely devoted to each other. They worked together and risked their lives to create a stop on the underground railroad for escaping slaves. They built the “Hundreds Meetinghouse,” the second church in town (still standing as a private home at 377 Weston Road), and one of the first Methodist churches in the country. They even started their own library when the Fells Sewing Circle carefully stored some cherished shared books in the front parlors of members’ homes.

That spirit of closely-bound neighborliness is still felt strongly today in the Fells area, where most of the homes are smaller and built more closely together than in other parts of town, joining young families just starting out with seniors who have lived here much of their lives. This rather densely-packed interdependence leads to what residents proudly call an old-fashioned “Leave it to Beaver” feeling of extended family with shared recreational spaces and activities such as block parties which have been going on for generations.

“The Fells neighborhood is what Wellesley’’s all about,” says Vin Juliani, a current Selectman who has lived here for 26 years. “It’s the old fabric of Wellesley – people, convenience, services, just being together. We’re so close that we know our neighbors, and really bond with them, out in our yards, or walking our dogs, or at street cookouts. It’s really nice to be part of that.”

Two lively centers are the neighborhood schools, Bates and Hardy. Until World War II, Fells was still quiet and fairly undeveloped, known mostly for its astonishing, world-famous greenhouses, near what are now Beechwood and Northgate Roads. (Wellesley was then known as “the carnation capital of the country”). But after soldiers returned home from war, there was an enthusiastic surge in building, and an equally enthusiastic surge in population. So Bates School quickly joined Hardy in 1923 (which replaced the one-room schoolhouse) and Perrin (later destroyed in a fire) in the Fells area. Today 353 students attend Bates and 275 attend Hardy.

Bates chose its name to honor Katharine Lee Bates, the author of “America the Beautiful,” who lived much of her life in her beloved home just down Weston Road at 70 Curve Street, and which she named “the Scarab.” A plaque inside the school’s front door bears the dedication, and in the library the children can use the archive of her writings, photographs, and letters.

“We love being named after this wonderful writer and educator,” says Bates principal Amber Bock, who notes that “America the Beautiful” is their school song. “Given my first name, the children particularly enjoy the line, ‘for amber waves of grain’!”

While families fill Bates each year for traditions such as the Pumpkin Fair, Hardy School (named for John Dudley Hardy, another nearby resident) draws them in for its annual Winter Carnival.

“We’re thrilled to be in a neighborhood where we’re able to walk to a great school with such a family feel,” says Julia Blake, the mom of three Hardy students (with two more not yet in school). “The neighborhood school system is such a treasure of Wellesley’s. We came here from Texas, where our little ones had to be bused to a school of 1200 students. We rejoice in what we have here.”

Fells is very much a multi-generational area. Many parents of school-age children grew up in the area themselves; some still share the family home with aging parents. For example, Dorothea Kelly still lives, along with her daughter and grandchildren, in the home she and her husband built when he returned from World War II. All take great pride in Kelly Field on Elmwood Road, dedicated by a boulder to the two Kelly brothers who grew up in the Fells and were killed in the war. The teenagers of the third-generation now care for the memorial, planting flowers there each season.

The field abuts a major delight of the neighborhood: the 32-acre Boulder Brook reservation, with paths that wind through the woods and meadows. “The reservation is the heart of this very special area,” says Sue Wright, a Planning Board member who has lived here since 1978. “The Fells really is a full-service neighborhood. ‘Connectivity’ is the best word to describe it – you can walk to your library, schools, open spaces, and stores. It’s self-contained, well-planned, purely residential, and really has that neighborhood feel.” 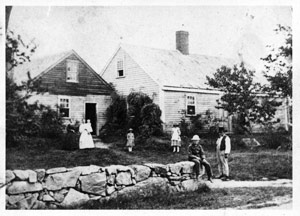 The small Fells shopping center not only is at the core of the self-sufficiency of the neighborhood, but also reflects the multi-generational make-up of its surroundings. Both anchor stores, the Fells Market and Andrews Pharmacy, are family-owned, and in each the grandparents are now cutting back on their work as they hand the reins to their children, and the grandchildren are growing up at home in the aisles.

“I really enjoy having our little stores right down the road,” says Dottie Haussman, whose grandchildren now visit her in the rhododendron-encircled white Cape where her children were born and raised. “It always reminds me of ‘Cheers’ – Peter and Paul in the market, and Michael and Laura in the drugstore, know everybody’s names. It makes you feel like you belong.”

The area is rich in annual events that have become traditions, such as the Wellesley Baptist Church’s Victorian Tea Party, held at the Tudor-style church snuggled in a tree-shaded spot right in the middle of homes on Elmwood Road. Each year, dozens of little neighborhood girls (regardless of faith) put on their best dresses and behavior and take their mothers and grandmothers here for an afternoon of grown-up treats.

Another favorite tradition is the Northgate Association’s Costume Parade, an annual event for more than 40 years. Led for decades by the unmistakable (and piercingly unforgettable) bagpipe of the late Charlie Spooner, it is only one of the Northgate area’s year-round activities, which range from a holiday cookie exchange to a progressive dinner; from a girls’ night out to cocktail parties; from an Easter Egg Hunt to a summer block party complete with moonwalk.

“We’ve lived here for 30 years, and it was the friendliest place to bring up our children,” says Northgate resident Beth Kalejs, of the development built on the site of the old Boulder Brook dairy farm. “Now our grandchildren come back for the parties and parades. People are very aware of their neighbors, very caring, bringing casseroles when people are sick, sending flowers from the association when there’s a death. The area is filled with young families again, which is great fun to see.”

Many of the children who have grown up in the schools of the Fells have returned to raise their own families; others have gone on to different stages, like the former U.S. Ambassador to NATO Nicholas Burns (whose father still lives in his childhood home on Shirley Road), or Pulitzer-Prize winning poet Sylvia Plath, whose 26 Elmwood Road home (owned by her mother for almost 50 years) features prominently in her autobiographical novel The Bell Jar.

But perhaps the story that best exemplifies the spirit of the Fells neighborhood goes back full circle to its beginning. The area’s century-and-a-half-old proudest landmark, the cozy little library filled with picture books for children and comfortable chairs for their grandparents, was scheduled to close in 2005, because of budget cuts. But its neighbors couldn’t imagine daily life without it. So in three weeks last spring they raised the $66,000 needed to keep it (and the Hills branch) open for a year, much of it coming from children’s quarters and seniors’ dollars.

After more than 50 years in Wellesley, Betty Rockwell still walks to “my” Fells Library, where she and friends of the Round Table Garden Club plant and care for its period gardens. She shares the library now with her great-grandchildren as she did with her grandchildren and children before.

“What a treasure, for four generations of us to be able to enjoy this together,” she says. “It’s absolutely the feeling of family here. Growing up, my grandchildren called it ‘our special 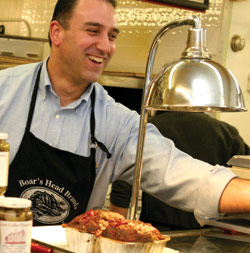 place’. It would be a tragedy if we lost it. The whole neighborhood has banded together to keep it open, because it’s our heart.”

The residents’ battle for the library’s long-term survival continues, because they recognize and cherish that they have something very special in their neighborhood. Their dedication is strong and their conviction absolute. The resolute 19th-century “Pine Plainers” would be proud.