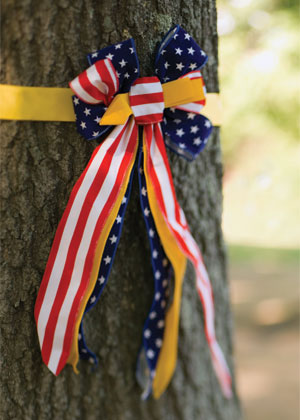 “Let the word go forth from this time and place, to friend and foe alike, that the torch has been passed to a new generation of Americans-born in this century, tempered by war, disciplined by a hard and bitter peace.”
-John F. Kennedy

Approaching Roche bros. supermarket in Wellesley on a chilly Saturday morning, it is evident that the holidays are nearing as people festively whirl about completing their weekend-morning chores. I almost brush past the shivering, elderly gentleman hunched in his overcoat, standing by the store entrance with a Veteran’s Administration donation can in hand. Peripherally, I notice a blue baseball cap with gold lettering signifying him as a World War II veteran, a sailor from the USS New Jersey, battleship, BB-62. Despite my haste, I pause and remember the raw-boned, gravel-voiced commands of my Marine Corps drill instructors from eons past. Striking up a conversation with the friendly gentleman, time appears to slow as we, two veterans from different eras, reminiscence. The faces have changed, but the sacrifices and traditions remain the same. Our conversation shifts toward those serving in Iraq and Afghanistan. We do not know a single Wellesley or Weston resident currently serving. 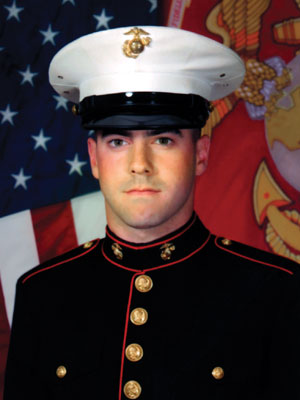 Conor, just focus on taking care of your Marines under you. Keep thinking of your mother. She’ll always protect you.” Conor’s Father, Christopher

The middle sibling of five brothers, Lance Corporal Conor Stevens, USMC, exhibits a tenacious, indomitable spirit that enabled him to play nose tackle for the Wellesley High School football team, despite being 5 feet 7 inches and weighing only 150 pounds. Although Conor enjoyed a notably comfortable upbringing, made Dean’s List at UMass, Amherst, and enjoyed the college social scene, he felt a void in his life that needed defining. Conor’s father, Christopher, proudly described his son’s desire to serve people, especially those less fortunate, dating back to his altar boy days and as a spiritual leader at St. John’s Church in Wellesley. Influenced by his cousin and an assistant football coach, both of whom enlisted in the Marines, and inspired by former NFL star turned Army Ranger, Pat Tillman, Conor decided to enlist. According to his dad, however, the greatest influence on Conor’s decision to enlist was the shocking, untimely passing of his mother to cancer. He wished to make his mother proud by becoming one of “The Few. The Proud.”

Conor left for Iraq in February, 2007, and conducted patrols in the notorious Al Anbar Province where over 40 percent of American casualties have been sustained. After months of experiencing the breathless, stabbing pangs from the anxiety of combat, Conor was chosen from 150 Marines and ordered to “enjoy” three days “R&R” (rest and relaxation) in Qatar. Although well deserved, Conor’s thoughts remained with his “brother Marines” whom he felt equally deserved R&R.

From half a world away and with quiet empathy, Conor’s father listened to his beloved son, who is not legally old enough to order beer, vent. Conor described “a land that God forgot” that is expressionless, arid and stifling hot, and ravaged with death and suffering. He also talked about the carnage inflicted by IEDs (improvised explosive devices). Although an IED sounds politically correct, almost sterile, the results are anything but the former. Despite his paternal instinct and the paralyzing fear every time someone knocked on the door, the elder Stevens reached deep from within to console his son, “Conor, just focus on taking care of your Marines under you. Keep thinking of your mother. She’ll always protect you.” 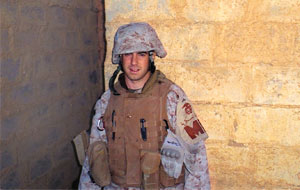 All wars fuel paradox. After returning from one mission, Conor experienced hilarity caused by family and thoughts of home. While being soothed by merciful air conditioning inside his “chow hall” and watching a live Red Sox/Braves game, Conor was stunned to see a split-screen close-up of his older brother, Casey, and Red Sox closer Jonathan Papelbon while Casey demonstrated his overly enthusiastic support for Papelbon. Similar to an adrenaline high produced from a firefight, Conor shot up and screamed that his brother was on television in Atlanta over 7,000 miles away! Ironically that day, the Red Sox, who broke so many hearts for so long, helped facilitate a sublime reminder of a better place.

Conor related another experience that occurred while guarding an insurgent who was wounded and being treated at an American hospital. During his eight-hour shift, Conor witnessed the extremes of suffering that war brings: American and Iraqi soldiers, insurgents, and civilians moaning in agony, the stench of stale blood, and the threat of impending death looming over patients. In the midst of the misery, Conor noticed a four-year-old Iraqi girl sitting politely with her father, waiting her turn to see a doctor. Taken aback that someone so fragile and calm could be caught in the eye of such a savage storm, Conor was immediately charmed by the child’s inquisitive eyes and innocent smile. Moved, he offered her candy. A nurse explained the girl could not eat the candy because she had been shot in the stomach by an AK-47 just two days earlier. The girl’s father then showed Conor the extracted bullet, and to show appreciation for Conor’s kindness, the little girl gingerly leaned over and kissed him, shattering any calluses that may have formed around his heart.

When he recently returned home, Conor gained a new appreciation for life’s immeasurable gifts. His combat-seasoned voice softened when he described the beauty of manicured Wellesley lawns, the smell of clean cotton sheets, the pleasure of ordering pizza, the tranquil sound of chirping birds, and, of course, wallowing in the love and support of family and friends. Despite an acute appreciation for life, Conor’s thoughts are never far from other volunteers, whom, he reminded, are still fighting and dying so we can continue enjoying life’s simple blessings. Pensively, he sighed, “I just hope I made a difference…” 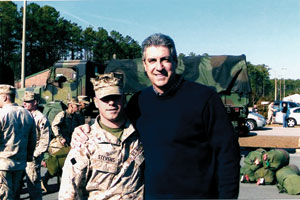 Third time is not always a charm. That feeling was implied from a courageous and spiritual woman, Pam Wilkins-Horowitz, mother of Sergeant Mark Wilkins, US Army, who shipped over to Iraq for his third tour this past Labor Day weekend. Listening to Pam speak of her son, I sensed unconditional love and a nurturing bond that is universally inherent in mothers. Humbled, I realized the depth of a mother’s sacrifice when her precious son or daughter leaves for war.

Pam described Mark as always willing to help others. In addition to being a youth leader at Weston Congregational Church, Mark once saved a classmate who accidentally ran into a plate glass window and dragged him from danger before the glass crashed down. As a little boy, Pam joyously recalled her son playing with police cars and ambulances. At 13, he exclaimed, “Mom, some day I’m going to drive a Humvee!” 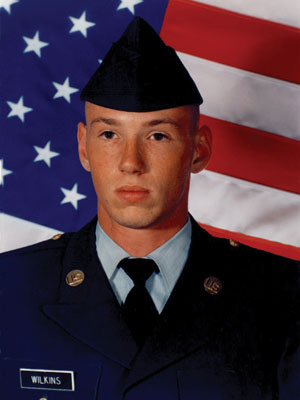 Active in the Weston Police Department’s “ride-along” program, Mark decided to enlist as a military policeman before embarking upon a civilian law enforcement career. In 2003, Pam flew to Germany to see her son off before going to Iraq. He was barely out of high school. The night before he left, Mark gently embraced her, “Mom, please don’t cry tomorrow. I don’t want to remember you with tears in your eyes.”

Like a good trooper, Pam complied. Although communication with her son was limited to sporadic, three-minute phone calls, she viewed her “job description” as waking up, praying, and believing that Mark would be safe, confident in his abilities and training. After the invasion, he said the Iraqis “viewed Americans as liberators.” As military policemen, Mark’s unit was immersed in the Herculean task of securing Baghdad, restoring order, settling property and housing disputes, and training and organizing Baghdad’s fledgling Iraqi Police Department. Despite the chaos, there was much hope.

The night before he left, Mark gently embraced her, Mom, please don’t cry tomorrow. I don’t want to remember you with tears in your eyes.”
-Sergeant Mark Wilkins

The euphoria of Mark’s return from Iraq was replaced by Pam’s realization that her son was forever changed. Loud noises made him edgy, he sat with his back against walls, and “his language and demeanor were rough.” Her son warned her he was no longer “happy-go-lucky Mark.” 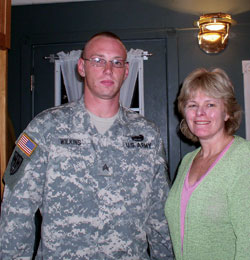 Two years later, Mark’s unit was ordered back to Iraq. During the five hour trip to Fort Drum, New York, mother and son drove in virtual silence. Mark collected his thoughts and donned his “game face” while Pam quietly wrestled with, “Is this the last time I’ll ever see him?”

Back in Iraq, Mark felt the Iraqis had accepted that the Americans were fighting for them and were trying to help them. They responded by letting the Americans try to do their job, while volunteering valuable information on insurgent activity. Improvised Explosive Devices, which frayed nerves and caused casualties from an invisible enemy, also became commonplace.

During one prisoner escort, Mark’s Humvee was hit by an IED. Some shrapnel pierced his right ear lobe and bounced off his helmet, earning him a Purple Heart. A piece is still embedded there like a metal stud that some fashion-conscious males sport back home. Despite his wound, Mark assisted his patrol leader with immediate action procedures and helped get his convoy to safety.

Meanwhile, Pam conducted her daily ritual by seeking Bible scripture to read. Her faith in God was reinforced when she randomly opened to the words of David in Psalm 140:7-8: “O God the Lord, the strength of my salvation, who hast screened my head in the day of battle.” She also received much support from fellow church members and friends who lit candles at dinner for her son.

When I asked Mark if America should be there, he focused on positive things that have been accomplished: schools have been built, medical care centers have been localized so that villagers do not have to walk over 30 miles or so to receive medical attention, running water and electricity have been restored, and relative security has been established in common gathering areas such as local markets or bazaars. Mark was particularly impressed at how Iraqi children were ecstatic to receive books, pencils and backpacks that were handed out from military convoys.

Funny, [that] soldiers sacrifice their freedoms so that others can enjoy theirs. But I’m okay with that.”
-Sergeant Mark Wilkins

In 2005, Pam again flew to Germany to welcome her son back from his second tour. The axiom, “an army marches on its stomach,” still applied. Pam prepared five pot roasts with the fixings for Mark and his buddies. Although delighted by the first home-cooked feast in a year, the soldiers’ stomachs had shrunk and they were not acclimated to such rich food. Grateful, they assured Pam that they would enjoy the meal, but that it would take them a little longer to complete this “mission.” As Mark prepared for his third tour of duty, he resolved, “I’m proud to do this important job so others don’t have to. I’ll lead my soldiers and do my job well… Funny, [that] soldiers sacrifice their freedoms so that others can enjoy theirs. But I’m okay with that.”

Amazed, I thanked him for his insight, but especially for his service to country. With boyish humility, he merely replied, “Ah, it’s no problem. . . ”

The World War II veteran comes to mind again. Smiling, I recall how we exchanged salutes before walking away. “We were soldiers once, and young.” My thoughts switch to Lance Corporal Stevens and Sergeant Wilkins standing watch over there while we sleep back here. They are among America’s finest, and, unarguably, among Wellesley and Weston’s treasured sons and daughters.