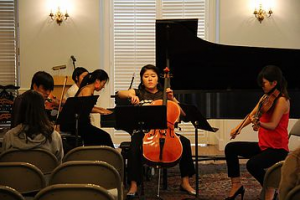 Appreciation to mothers for their love and support of their children and family will be the theme of this special concert by the Wellesley Chamber Players on May 21, at 3:00, at the Dana Hall school.

The featured work, Dvorak’s Piano Quintet No. 2 in A major, Opus 81, is a stunning piece with the well known, haunting melody of “Nature Boy,” popularized by Nat King Cole, in the second movement.

Other pieces on the program are Ravel’s Ma Mere L’oye (Mother Gooose), and Rachmaninov’s Trio Elegiaque No. 1 in G minor.

This final concert of the season will be a special treat for all the family.

The performing artists include players who have performed internationally and have won numerous worldwide competitions. Jennifer Gaul, pianist, is Director of the Dana Hall Music School. Jayoung Kim is a staff pianist at the New England Conservatory and at Boston University. She is a member of the music faculty at Dana Hall and has performed at the Royal Concertgebouw and Jordan Hall. Eunae Ko, a prizewinning violinist, in addition to playing in orchestras in New Zealand and Boston, has performed and collaborated with several Boston chamber groups. Sasha Scolnik-Brower, cellist, has played in several symphony orchestras and is Director of the Bach Society Orchestra and Assistant Conductor of the Harvard-Radcliffe Orchestra. He is enrolled in the Harvard College/New England Conservatory Dual Degree program. Stella Chen, has been a soloist on tour in Israel, Jordan, and Colombia, and has been a prizewinner in numerous competitions. She will enter Julliard School for a Doctorate in Music this fall.

Launched just this year, the Wellesley Chamber Players are eager to communicate their vibrant musical vision to their Wellesley audience. The concerts are performed in Beveridge Hall at the Dana Hall School, 45 Dana Road, off Grove Street, Wellesley. Refreshments will be served following the program, with an opportunity to meet the performers. Suggested Donations $20 for adults and $10 for students to help the cost of the concert series.