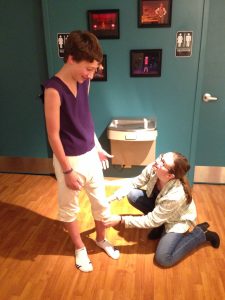 Adapted from Disney’s 1992 animated film, Disney’s ALADDIN, JR. features tuneful songs from the Academy award-winning score by Alan Menken, Howard Ashman, and Tim Rice including “A Whole New World” and “Friend Like Me,”. Join us in Agrabah as we follow Aladdin, Jasmin, Jafar, and the Genie on a musical adventure filled with magic, mayhem, and flying carpet rides.

A talented cast and crew of 50 students between the ages of eight and fifteen bring to life these classic movie characters. Cast members of Disney’s ALADDIN, JR. reside in Wellesley as well as neighboring communities including, Weston, Waban, Needham, Natick, and Newton. Director Hannah Shihdanian says, “During the rehearsal process of Aladdin Jr., the students explored the culture of the Middle East in order to bring their characters to life!”