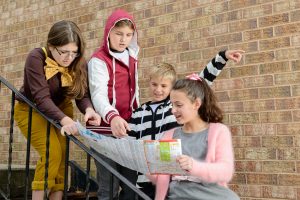 Specially based on the smash hit DreamWorks animated motion picture, Madagascar: A Musical Adventure Jr. follows all of your favorite crack-a-lackin’ friends as they escape from their home in New York’s Central Park Zoo and find themselves on an unexpected journey to King Julien’s Madagascar.

Join Alex the Lion, Marty the Zebra, Melman the Giraffe, Gloria the hip hip Hippo and, of course, those hilarious, plotting penguins for songs like “I Like to Move It” and “Best Friends” in this musical adventure of a lifetime. Will they make it back home to New York, or will they get eaten by the hungry foosas?

Due to a high demand in participation there are two talented casts filled with 50 students between the ages of seven and thirteen that comprise and electric ensemble of ZooKeepers, Zoo Guests, Lemurs, Penguins and other exciting animals. Cast members of Madagascar: A Musical Adventure, Jr. reside in Wellesley as well as neighboring communities including Auburndale, Natick, Needham, Newton, and Concord.

Registration is open for WTP’s Winter/Spring classes and productions including Cinderella, 13: The Musical, and The Complete Works of Shakespeare (Abridged). In addition, registration is open for 2018 Summer Camps. Sessions include three production camps geared for students between 2nd and 12th grade in addition to one week Theatre Arts camps for Pre K- 12th grade. The production camps are: Magic Tree House: Dinosaurs Before Dark (Grades 2-8), James and the Giant Peach (Grades 2-12), and 1776: An American Musical (Grades 9-12).

For more information about Madagascar: A Musical Adventure, Jr. or other Wellesley Theatre Project classes and productions, please visit www.wellesleytheatreproject.org or call 781- 235-1550.